Google Chrome’s Canary builds are experimental snapshots of what Google is working on for future stable versions of Chrome, and unlike the developer or beta versions, Canary can be used alongside the stable version, making it a safer choice for those who want to try the latest and greatest but still value stability most of the time.

A few days ago, we showcased a feature present in those builds that strips the browser from the address bar and replaces it with a popup that only shows up when needed. That compelled us to go further and dig out three more interesting features you should look for next time you use a Canary build.

In order to access these features, you must navigate over to about:flags, Chrome’s dashboard for experimental and often unfinished features. While most of them are developer-oriented, a few of them aren’t. Here are the best ones:

What it does: About a year ago, the ability to sync bookmarks and settings was introduced in Chrome. Multiple user profiles takes this one step further, allowing different users to log in and letting each see their bookmarks and settings, having it all erased when they log out. Picture this feature on a public computer: people would be able to log in with their Google ID and access the same settings they’d have at home and still be confident their sensitive info would be gone once they left.

Implementation Status: Users are able to log in using their Google Account and user data is downloaded immediately after. As expected, all data is removed once the browser window is closed, but there’s no way to "log out" and delete the data without doing so.

What it does: Tab grouping was first introduced by Microsoft in Internet Explorer 8 and quickly made its way in different forms to other browsers through extensions. Chrome is bringing a similar feature to the table, allowing users to group tabs by domain (e.g. all tabs where the domain is redmondpie.com/) or by opener (all tabs generated by links from other tabs), all through a simple right-click. Grouped tabs will appear more prominent, while the remaining ones will fade away.

Implementation Status: It’s as of yet unclear what Google wants to do with this feature. Grouping tabs indeed works, but groups are immediately dissolved once the users clicks away. Unlike Internet Explorer, entire groups can be added around, by there’s no way to have multiple ones. This feature is clearly in its early stages of development and will definitely be improved on as time goes on. 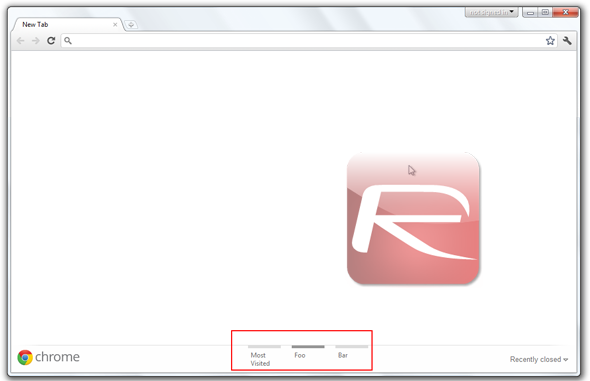 What it does: Chrome’s "New Tab" page has always been a fairly rich one, and it’s now due for another redesign. The new layout seems to be split into three separate pages, currently oddly named "Most Visited", "Foo" and "Bar". The "Most Visited" section is just what you’d expect: thumbnails of your most visited pages. The remaining two sections remain empty at this point, but my guess would be they will list installed and/or available extensions and apps, since those are both oddly absent from the new page as of yet.

Implementation Status: Poor, at this point, but what’s there is functional. Newest sites and recently closed items are still accessible, just not Chrome applications, which will likely be placed on the remaining pages, currently empty.

You can download the Canary build from here and run it alongside your Chrome, if you’re already using it.

If you’re running Chromium or using Chrome on the developer repository, these features should be accessible to you as well. We’re only featuring Canary builds since they’re the easiest to set up and maintain for most users.

Of course, most of these features are still at a very experimental stage: they’re disabled by default for a reason. However, they still provide a sneak peek at what Chrome will look like 6 months down the road. Happy browsing!