While we don’t officially know what Microsoft will be introducing to the major Windows Phone 8 Apollo update that the company plans to drop later this year, people are as usual making mockups of what the future OS could look like. Now normally, I dismiss concepts as they are usually either impractical, ridiculous, or both, but this one is actually a pretty simple idea that can help boost the consistency between Microsoft’s desktop and mobile OSes. 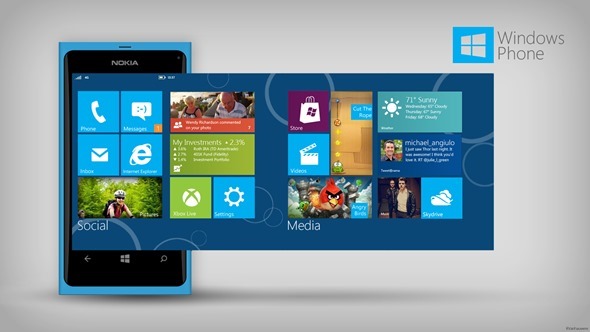 As you can see above, the mockup created by DeviantArt user RVanhauwere simply illustrates how the now-familiar Start Screen on Windows 8 would look if adapted to a mobile form factor. Quite simple, right? I think that this would be a wise thing to do; it would allow people to do more with their home screens (thanks to the horizontal scrolling paradigm that this would introduce), and it would bring Windows Phone closer to Windows 8 in a pretty good way.

Could Microsoft actually be working on this, though? There haven’t been reports of any such UI changes being implemented thus far. In fact, we don’t know much about whether or not the company even plans to make any significant changes to the UI. That being said, we do have a pretty fair idea thus far of what is to come in Windows Phone 8 feature-wise.

As we reported on in the past, here’s what has leaked thus far about what Windows Phone 8 will bring to the table: Possible Skype integration (though this has been questioned), a tool called DataSmart which allows you to monitor your data usage, Bitlocker support, and a shift to the NT kernel (Windows Phone is currently based on CE), and this is all just on the hardware front. Some pretty big hardware changes are also rumored, such as NFC support, removable microSD cards, multi-core processors, new form factors (not sure what this means specifically), and four different screen resolutions.

Microsoft has also recently reaffirmed that existing Windows Phone apps will be able to work on the new OS, but they haven’t exactly commented on whether existing-generation devices will be able to receive the upgrade. Presumably, the answer is yes, and Microsoft aren’t willing to comment to prevent current sales being impacted by the news.

Again, Apollo is set to be released sometime towards the end of the year, making it an even busier time for Microsoft enthusiasts.