This Toyota 4Runner Is Controlled By iPads [VIDEO]

A significantly increasing number of us are beginning to use, trust and interact with mobile technology in a way we never imagined would be possible at the turn of the century. As that technology becomes more ingrained in our everyday existence, it seems that the knock-on effect is a willingness for different industries to stand up and invest precious resources into seeing how they can take advantage of the latest tech. One of the latest examples of that investment has recently been shown by Toyota who has sponsored an innovation competition that promotes the use of technology alongside the art of customizing motor vehicles.

The competition is focused on allowing individuals and companies to come up with the most customized and innovative vehicle possible that would be shown off at the SEMA Auto aftermarket trade show that is currently ongoing in Las Vegas. The show obviously attracted a lot of attention and a number of vehicle entries, but the one that immediately stood out for us – although it didn’t take home first place – was the use of iPad and mobile technology to control a heavily customized Toyota 4Runner sports-utility-vehicle (SUV). 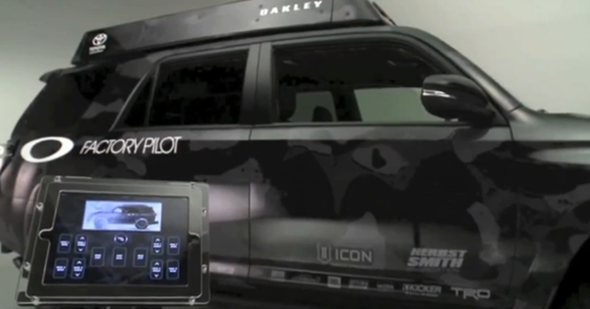 Herbst Smith Fabrication has gone all out on the Toyota by covering it in an entirely bespoke camouflage vehicle wrap , stunning LED lights as well as an integrated roof rack that can be electronically opened and closed at will to store multiple sets of ski equipment. Of course, Apple’s iPad would be integral to any of those electronic based features with most of them being operated with the simple touch of a button. The car doors, front and rear windows, music and other internal offerings like climate control are also controlled through the use of an iPad. 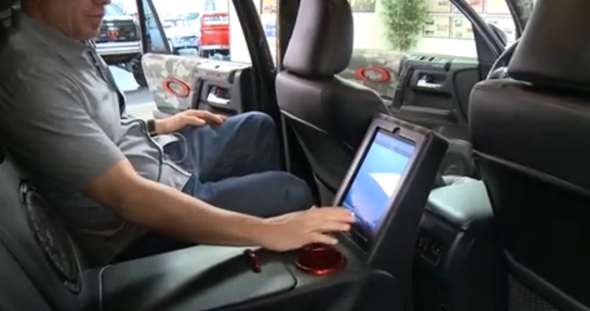 If the guys at Herbst Smith had left it there then we would have had a fairly impressive 4Runner that could actually be conceivably used in the real-world. However, this competition was all about total customization so the inclusion of a coffee maker, multiple driers for ski gloves and a mountable grill all adds to the insanity of what an iPad controlled SUV should be. Apple themselves have already expressed a public desire to find a route into the automotive world. That could be through partnerships with existing reputable manufacturers or by bringing their own Apple car ideas back to life.

Regardless of their eventual route into this industry, it will be extremely pleasing to the Cupertino company to see their hardware used in such innovative and useful ways.