An intriguing new concept for iPhone shows just how a rather endearing, whimsical and simplistic interface could help us to once again appreciate the look of 3D shapes and effects on our device’s display. Designer Doug Hindson has, along with his colleagues, created a short demonstration video of his idea, and although the ‘Skew’ concept perhaps makes little practical sense given the current state of iOS 7, it does look rather nice. Catch the full clip, which we’ve embedded for your viewing pleasure, right after the break.

There were plenty of complaints pre-iOS 7 that Apple’s mobile operating system was becoming somewhat stale and that each new iteration felt like a scarcely-tweaked replica of the previous version. Having done away with iOS lead and Steve Jobs protégé Scott Forstall, hardware design guru and general enigma Jony Ive took the reigns, and among other changes, decided to completely ditch all trace of skeuomorphism. Any sign of 3D renders or leather effects was banished in place of flat lines and clean shapes, and although there was some initial resistance, users seem to have taken to iOS 7 rather well. 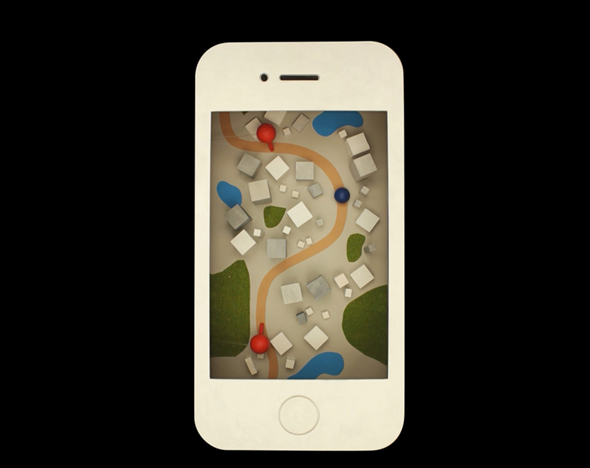 Despite this, it’s worth remembering that for nigh-on seven years, paper effects, lifelike transitions and skeuo elements within the interface were vogue, and while we took out our general frustrations with an OS on its look rather than functionality, the aesthetics weren’t the main issue that some people held with iOS.

As noted in the video’s description:

‘Skew’ turns the idea of skeuomorphism on it’s head: we re-made some well known skeuomorphic interface designs in the materials and objects they were trying to imitate; as well as subtly commenting on the mundane cycle of the digital day-to-day.

Certainly, Skew makes things a lot more interesting to look at, and having seen the clip, we would be more than intrigued to see how this ran on an actual device.

Yes, it does make the reasonable point that running daily digital errands can become a rather monotonous cycle, but nevertheless, the latest version of iOS – as well as Android’s latest 4.4 KitKat – are both extremely practical and efficient. And that, for the general population, is what matters.

Check the vid below, and be sure to leave your thoughts via the usual mediums.