This iPhone 5s Case Turns Your Device Into A Makeshift Dumbbell! [VIDEO]

There has been a noticeable increase in the number of apps, devices and peripherals catering to the health and fitness-conscious of late, but a new product by the name of ToneFone, created by British company DesirableBody, has taken things to the next level. Playing on the idea that we spend far too much of our time with our devices in hand, the ToneFone essentially weighs down your iPhone, doubling it up as a dumbbell, and we can’t for the life us, decide whether it’s about the craziest idea for a phone case we’ve ever seen, or a mere stroke of genius.

There’s normally a fine line between the two, but with folks seemingly willing to take much more drastic measures in order to achieve fitness, health, and that desirable body as the company’s name alludes to, the ToneFone is actually one of the more innocuous fitness-related fads out there.

Every time you send a text, email, or decide to browse the Web on your ToneFone-wrapped iPhone, it becomes something of a workout, and as well as unquestionably burning the calories, the aching arm may prevent you from sending those rather grating, unnecessary one-line messages, which can only be a good thing.

In fact, the more I think about it, the more I feel that the ToneFone should perhaps be a compulsory accessory, if not for the health benefits, then for the freed cellular traffic as users suffer repetitive strain.

DesirableBody, as well as having a pretty undesirable name, touts the ToneFone as the "world’s heaviest iPhone case," which, when you’re in the business of selling dumbbells for smartphones, is probably just as well. The company also, rather comically, suggests that "even when you order a takeaway, you get fitter," which should make users feel a great deal better about subsequently ordering enough food for two people. 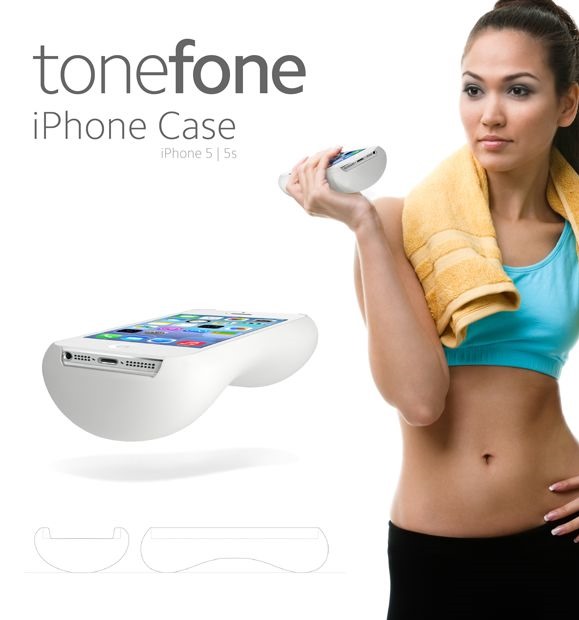 Speaking of weight, the ToneFone, which is designed for the iPhone 5 and iPhone 5s, ships in a 1kg (2.2lb) or 1.5kg (3.3lb) variant, depending on how much hard labor you wish to do just to tweet about that takeaway you’re about to devour. It’s comprised of steel, and is coated in a rubber film for comfortable grip, but obviously, things could slip if you end up with too much noodle-grease on your fingers.

Even though I can see a tongue-in-cheek attempt at innovation, I’m not sure how much value the ToneFone has as an actual product. Sure, in theory, it kind of works, but then, when you’re not using it, do you just carry a 1.5kg weight in your purse or jacket pocket? And if you’re not hauling it around 24-7 but rather just using it at home, wouldn’t it be just as easy to buy a real dumbbell?

Still, whatever you think of the ToneFone, you have to admire the tenacity of the company behind it, and we’d love to know whether you’d consider such a case for your iPhone 5 / 5s, so be sure to leave your comments below!