Apple announced a smorgasbord of new and updated products yesterday, including the 13” MacBook Pro with Retina Display, all-new iMacs, refreshed Mac mini, fourth-generation iPad and, the most important device of all, the iPad mini.

Now, the iPad mini may not be everyone’s piece of cake. Some say it’s too expensive for a small tablet, others feel that the operating system it’s running on – iOS 6 – is outdated compared to Android.

If you’re of the same opinion, then you’ll be interested to see this iPad mini clone from China we came across today. Check it out after the jump. 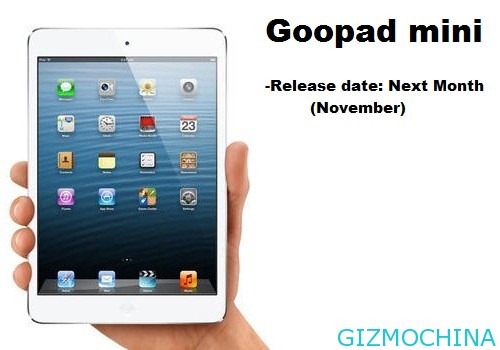 The iPad mini clone – which is officially named GooPad Mini – comes from Goophone, the same company that released the iPhone 5-like Goophone I5 after patenting the iPhone 5 design based on earlier leaks.

GooPad’s internals aren’t as impressive as the operating system its running on. According to the post on GizmoChina, it’s running Android 4.1 Jelly Bean with a custom launcher (theme, perhaps?) on top that mimics iOS’ icon-centric Springboard.

The only promotional image available for the tablet right now consists of only one official press image of the iPad mini, so we aren’t sure how close in design and quality it is to the source. Based on the general quality of Apple clones, though, I wouldn’t expect much from it.

But the most interesting quality of this clone is its unbeatable price! It costs just $99 for the 8GB model. That’s a full $200 less than the iPad mini WiFi-only 16GB base model!

The GooPad Mini is expected to be available sometime next month.

As far as I know, Goophone did not patent the design of the iPad mini in China, so they may just have to face Apple’s legal wrath when the actual iPad mini launches in China.

*I believe this is the first Android tablet to come with a 4:3 1024 x 768 display, so there is a good chance that some of your favorite apps may not work properly on it.