Google’s new Nexus 7 tablet has already proved to be extremely popular gadget amongst technology fans. As expected, it hasn’t flown off the shelves as fast as we generally see the iPad go, but recent reports have shown that consumers have already depleted official supplies of the 16GB model, with prospective purchasers now needing to wait until more come off the manufacturing line before they can get their hands on that Jelly Bean goodness. With Google only recently launching their first Nexus 7 commercial via YouTube, it represents a pretty decent success story without any actual defined advertising and we are pretty sure the popularity will continue as we move forward.

But what about the people who actually managed to get their pre-orders in or opted for the smaller 8GB version of the tablet? Well, with pre-orders all over the world being fulfilled and third-party suppliers selling the gadget, the chances are that a lot of happy tech lovers are taking every opportunity to use the device to its full potential. Although it is smaller than the iPad, it packs a lot of power and is an extremely capable piece of kit when it comes to playing games, downloading and watching TV shows or movies, reading books from the Play Store or more menial tasks such as sending and receiving emails. 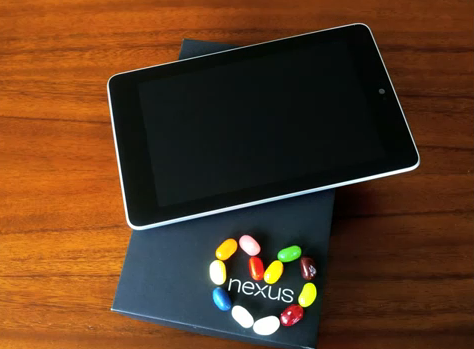 Some users may even choose to transcend from the normal functions of the device and are using it for a more unique purpose, like proposing girlfriend, for example. Sounds crazy right? In a move that is sure to strike a chord with even the toughest amongst us, a Google fan has thrust the Nexus 7 into an extremely romantic plot to ask his girlfriend to marry him whilst on a trip to Chicago. The official Google Nexus Twitter account tweeted out earlier that a "Googler" has recently proposed to his girlfriend using the Nexus 7 as a romantic implement.

The story begins on Independence Day with a trip to Chicago area and a few visits to local attractions like the Shedd Aquarium and Millennium Park. The romantic technology fan was beaten in a game of squash by the love of his life at the University Club, with the winner’s prize being a brand new Google Nexus 7 tablet already preloaded with all of her favorite books, TV Shows and movies. In normal circumstances, giving a gift like that and having the intricate knowledge of your loved one to load it with her favorite media would be enough, but the cupid went a step further.

The Nexus 7 was also set to display a YouTube video dedicated to Aditi, consisting of friends and family members displaying love for his lady before eventually popping the big question and asking her to marry him with promises that he will treasure, protect and hold her. What about her answer? A yes, of course. Who could resist a technology infused romantic offer like that?