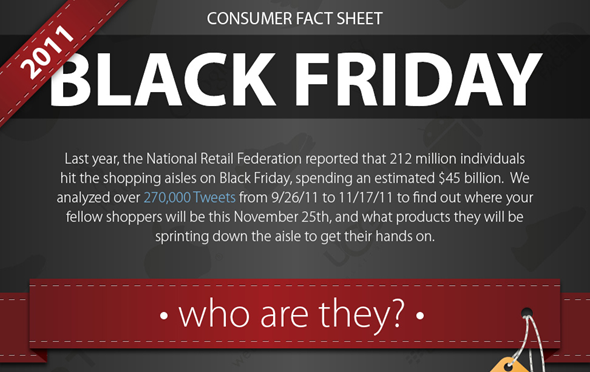 Research firm Mashwork has studied over a quarter of a million Tweets during the past month or so to determine which shops and products consumers will be rushing to the stores for today.

California and New York present the hotspots in terms of shoppers, with most Black Friday bargain hunters heading for Wal-Mart, Best Buy and Target.

Interestingly, even with the holiday season just a month away, the majority are buying products for themselves, and also, despite a great year for Microsoft’s Xbox 360 console, it seems gaming fans are more eager to snap up Sony’s PlayStation 3.

That said, most purchasing the software maker’s fledgling Xbox are now looking to get the full interactive experience with Kinect, so while the 360+Kinect combo may sell less this Black Friday, profits may could still be considerably higher.

Tying in rather nicely with the news that Apple looks set to become the world’s number one computer maker, Mashwork’s research has revealed that in terms of tablets and computers, consumers are looking at primarily purchasing an iPad 2, with the MacBook Pro coming in as second favorite, while HP – the current market leader – comes in third place as purchaser’s choice of computer manufacturer.

The Cupertino company’s iPhone 4S, preloaded with the wondrous Siri, is the most sought-after smartphone, with Samsung’s eagerly-awaited Galaxy Nexus in second, closely followed by HTC’s EVO 4G.

The Kindle Fire frenzy seen throughout the pre-order phase seems to have petered out, with the actual product being quite an average experience – reflective of its price. Indeed, for every ten mentions of the iPad 2 in the run up to the Black Friday, only one mention of the Kindle Fire has popped up, suggesting that any talk of a true iPad competitor was somewhat ambitious. We’re guessing that the iPad 2 will be a big winner for today.

Besides being a great weekend for shopping, Black Friday also foreshadows things to come in terms of the Holidays and how successful a product is to become in general. With Stateside Android fans having to wait a ridiculous amount of time to get hold of the coveted Galaxy Nexus, its presents the perfect opportunity for Tim Cook and his men to really cash in with what is essentially a nicely upgraded iPhone 4.

Seems as though Apple is winning on all fronts today!