Whenever manufacturers make the decision to go through the upgrade process and release a new version of one of their devices into the wild, they always put extra effort into attempting to make sure they get the maximum possible life out of the battery. They may not admit it, but hardware producers like Samsung, Apple and especially Motorola would trade-in a number of features on their phones if they could guarantee exceptional power performance, as it is just so important to users. With that said, we’ve all been in the situation where our smartphone dies just at the wrong time.

The Last Message app for smartphones running Android 2.2 and above is one developer’s attempt at ensuring that important contacts and connections aren’t left in the dark when the power eventually drains and the phone turns itself off. I’m pretty sure that we have all found ourselves in the middle of a text, email or social network conversation at one point in time only for the battery indicator to fall below that critical percentage level and turn off. Do our friends understand the peril that we find ourselves in, or do they just think we are rude for not replying? 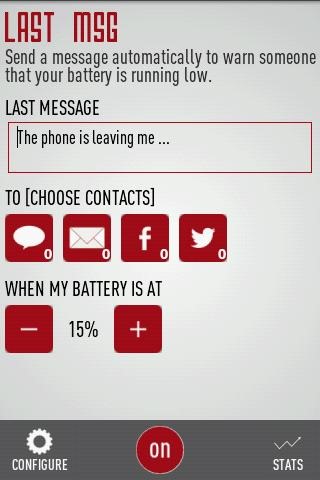 Last Message is a customizable application that permanently runs in the background on the device once it has been downloaded, installed and activated. The app silently monitors the battery levels on the handset, and when it gets to a critical level; it takes it upon itself to distribute outgoing messages based on a pre-defined set of rules that we have set up in the app. The app allows us to set up custom messages to send out to people in this situation that can then be sent through Twitter, Facebook, email or just plain SMS depending on personal preference and who it is we are trying to contact. 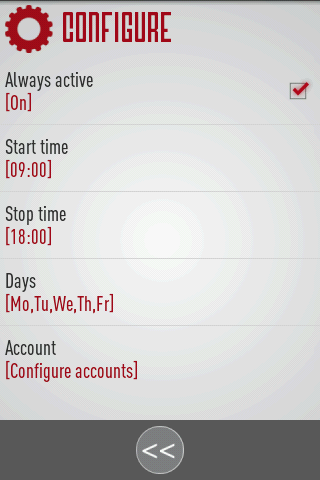 The user-interface of Last Message is attractive and extremely simple to navigate around. Advanced features such as being able to choose the days that we want the app to actually run on, as well as viewing statistics about the battery performance are also possible from directly within the application. It’s free of charge, functional and fills a void that definitely needed to be filled.