Before Apple introduced the world to the iPad as a mainstream, usable-for-everyone gadget, no one really believed that tablet computers would every become a mass usage item for a majority of technophiles the world over. Slate-based PCs existed long before that, but neither they were as powerful in their specifications, nor did they have an ecosystem as strong as iOS to back them up with a plethora or apps. Then, they were really overpriced, too, making it harder for average Joe to consider buying one.

Next to iPad come Android tablets, which took the world by storm. First, they’re numerous in numbers and diversity of the OS version, hardware specifications and brand names. Second, the Chinese manufacturers like Ainol have made sure that almost everyone can afford a usable Android tablet. For the same reason, app developers are focusing particularly on this genre of gadget, too, and more and more items keep surfacing each day. With the same concept in mind, Samsung is looking to blur the fine line between tablets and smartphones with its Galaxy Note line up – the phablets – with their revolutionary S-Pen stylus.

The S Pen, coupled with TouchWiz customizations, provides a lot of features to the device itself that you won’t find otherwise, like handwriting recognition when the stylus is used. Now, here’s the catch. The stock TouchWiz keyboard isn’t really impressive, but it’s the only one that offers gesture-typing and handwriting using the stylus in its truest sense (the other alternatives make it more of just a gimmick and nothing else). So, if you want to get the best of both worlds, you’ll find yourself manually changing the keyboard depending on whether you’re using your thumbs or the S Pen. Or maybe not, if you’re using SPenBoard Switcher. 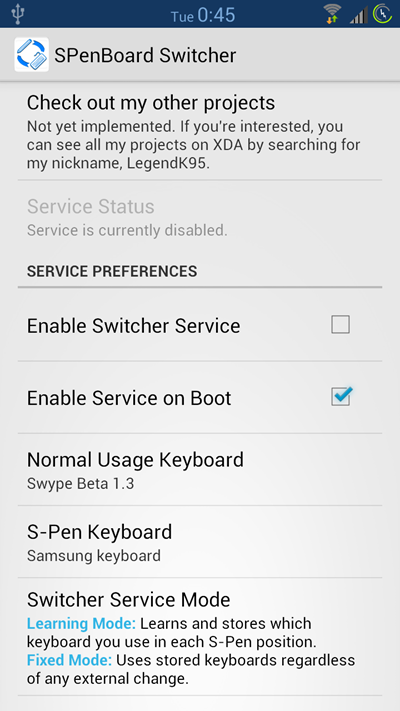 The app has been developed by XDA member LegendK95, and while it has been tested specifically on Galaxy Note II, it should work with any device that utilizes the S Pen Developer API. Essentially, what it does is change the keyboard automatically for you based on the position of the S Pen, allowing you to, for example, use the stock Samsung keyboard when the S Pen is removed from its holster, and switch automatically to SwiftKey when the stylus is docked. Cool, huh?

The app works unobtrusively, and is free, so there’s little you have there to lose. The only downside is that it will work only on rooted devices, since specific system-level permissions are required to change the keyboard without bother the user. If you own a Galaxy Note device with S Pen, it’s a must-try app. You may grab the APK at the source link below, as well as any troubleshooting support that you might require.