When it was introduced last year, the Galaxy Note created a big divide among the general online community of technology enthusiasts because of its polarizing display size. At 5.3-inch, it was too big to be a smartphone and too small to be a tablet*. Reviews from popular publications reflected this, with some calling it an awesome, category-defining device, while others felt it was the worst mix of smartphone and tablet features.

In the end though, it turned out to be a surprisingly successful product, having sold over 7 millions according to the latest figures.

Samsung recently announced the Galaxy Note II and it was launched a few days ago. With the innards of a Galaxy S III (1.5GHz quad-core Exynos processor, 2GB RAM, 8-megapixel camera), powered by Android 4.1 Jelly Bean, improved stylus design and apps, a slightly larger HD display at 5.5-inch and an industry-leading battery life, it has so far received mostly positive reviews.

Now, the thing most smartphone enthusiasts are interested in when buying a new device is how hackable / customizable it is. In case of recent devices from Samsung, the answer is very. Save for the unfortunate case of the Verizon Galaxy S III (which as later solve), all devices so far have been easily rooted and received good support from the developer community.

The Galaxy Note II was rooted a week back, but now there’s an even easier method out in the form of an all-in-one toolkit from XDA-Developers member mskip. 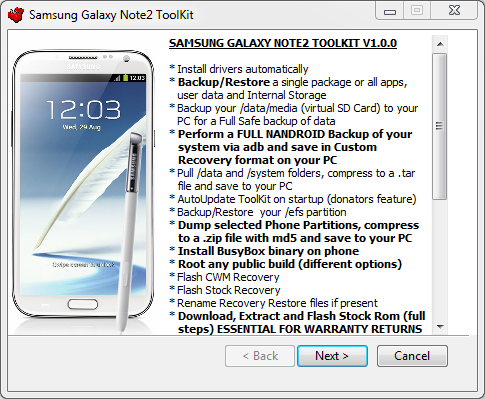 Simply named Galaxy Note2 Toolkit, the all-in-one tool lets you not only root your Galaxy Note II on Android 4.1 Jelly Bean, but also allows you to perform backups/restore (NANDroid or otherwise), flash ClockworkMod Recovery or reflash the stock recovery, flash other custom ROMs or flash the stock ROM again, install multiple APKs, change file permissions and a whole lot more! It’s the most powerful all-in-one toolkit I’ve seen in a while. 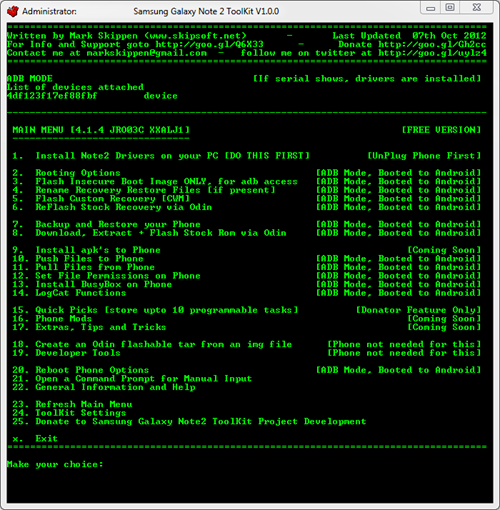 For now, the toolkit only works on Windows-based PCs. It can be downloaded for free from here. If you like the tool, you are recommended to donate to the developer so they can create more toolkits in the future.

*Some people now refer to it as a phablet.