Technology is a wonderful thing, especially when two pieces of tech come together to either do something super cool or fix a problem in people’s lives. ‘Camera For Apple TV’ manages to do both, and we love it! 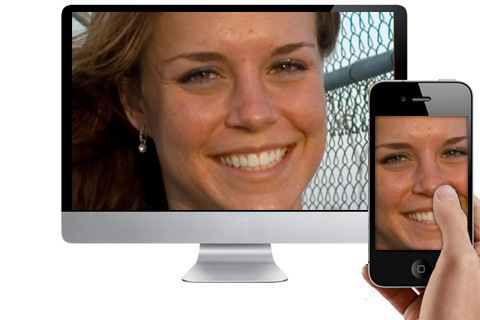 What ‘Camera For Apple TV’ does is quite simple yet amazing at the same time. After opening the app on your iPhone you’ll see the familiar camera view, with the screen showing you what the iPhone’s camera sees. What’s new is the equally familiar Airplay logo which, when stabbed with an eager finger, allows users to throw the video from their iPhones to the big screen using an Apple TV. That’s right, you’re iPhone’s camera is now being shown on an Apple TV.

Now granted, the frame-rate isn’t up to much, so you won’t be using the solution to watch anything that moves faster than a drunk snail but still, it works, and it works well.

Quality-wise it’s more than useable, though it doesn’t appear to be using the iPhone 4 camera’s HD abilities.

Not only is this a cool use of some existing technologies that we’d never even contemplated, it’s actually useful too. Imagine an iPhone and Apple TV being used as a security system (if only the Apple TV could record) or perhaps more likely, some sort of baby monitor?

‘Camera For Apple TV’ is available in the App Store now for just $1.99