Steve Jobs Vs Bill Gates In A Rap Battle? Err, Sure! [VIDEO]

Yep, this is really happening. Sure is, yes sir. We couldn’t make this stuff up.

If you’ve ever wondered what would happen if Apple co-founder Steve Jobs and Microsoft co-founder Bill Gates took to a stage and engaged in some sort of sing-off contest, then you’re about to be made very, very happy. If that sing-off contest needs to be in the form of a rap battle, then you’ll probably need to sit down for a minute to compose yourself before we go any further.

Right, here goes. If you’ve got popcorn to hand, then it may be worth banging it in the microwave and settling down to watch this rather mind boggling video. 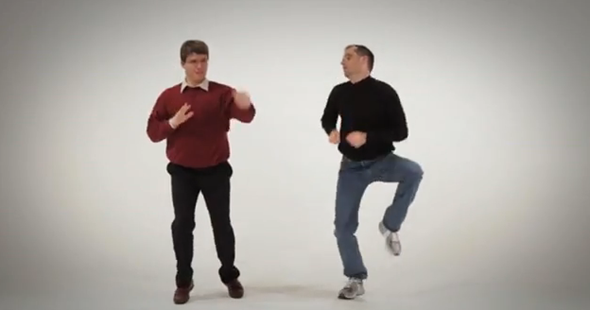 As part of its mashup routine, Epic Rap Battle has put together its latest comical song, this time featuring two of the technology industry’s most loved – c’mon, you know you do – visionaries, Bill Gates and Steve Jobs.

Both the late Steve Jobs and the man behind the Microsoft empire, Bill Gates, receive the rap battle treatment in a video that really does need to be seen to be believed. We’ve got references to the other half of Apple, Steve Wozniak, as well as Bill Gates’ wife, Melinda. It seems that nobody is safe when there is a comical video to be made! Even we’re afraid who will get the Epic Rap Battle treatment next, it could be you, them, or us!

The video itself weighs in at almost three minutes long, and fans of both Apple and Microsoft will probably want to check it out, especially if you are knowledgeable about the past of both companies, and how they are both so intertwined. If not, then just enjoy the funny video.

Epic Rap Battle is possibly more famous for some of the other videos that have been put out before this latest technology-slanted attempt. Battles between Darth Vader and Hitler have apparently taken place, as has a musical spat between Justin Bieber and Beethoven. We’re not even convinced that the Bieb actually knows who Beethoven is, for real, we don’t, but we’re prepared to give him the benefit of the doubt, at least temporarily.

Though the video might be a little harsh on either of the two, but hey, it’s good for some free laughs.