Unless you’ve been living under a rock for the last few days, you must have heard that Steve Jobs abruptly stepped down from his job at Apple earlier this week citing health reasons. Instead of dwindling into more speculation and unneeded (and sometimes downright disgusting) gossip, let’s instead look back at some of Jobs’ greatest accomplishments with the help of an infographic. 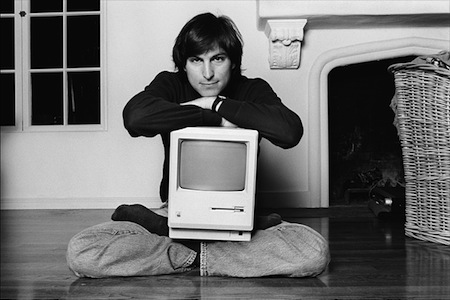 Steve Jobs was born in 1955 in San Francisco, CA and quickly handed over to adoptive parents who were able, according to Jobs, to provide him a college education unlike his biological parents. Ironically, 18 years later, Jobs dropped out of Reed College after only one semester, since, in his own words, he "didn’t see any value in it".

In 1976, Jobs founded Apple with his partner Steve Wozniak, who has long left the company. There, he created the Apple I, which was the first computer sold by Apple with the amusing price tag of $666.66, which, ironically, makes this particular machine cheaper than any member of the current Mac product line except for the entry-level Mac mini. The Apple I was followed by the Apple II, which was the first computer that required no initial configuration or assembly: it was even compared to a kitchen appliance at the time. The Apple II proved to become hugely popular for the company, remaining that way well into the 1980s.

In 1984, Steve Jobs, with the help of an independent business division inside Apple, created the Macintosh, which was aimed at being the first affordable commercial computer with a graphical user interface, unlike all others that used almost exclusively command line-based interfaces. The product’s low developer appeal and weaker-than-expected sales led Apple’s board, with the help of then-Apple CEO John Sculley, to oust Steve Jobs one year later.

During his time away from Apple, Steve Jobs created the well-known animation company Pixar, which is now owned by Disney, and personal computer maker named NeXT. The latter wasn’t particularly successful leading to its eventual sale to the then-struggling Apple in 1996, causing Steve Jobs to become the interim CEO of the company shortly after. Back at Apple, Jobs took action to replace the company’s board and replacing – literally – Apple’s redundant and confusing product line. Old beige boxes that ran an obsolete operating system were replaced by iMacs, iBooks, PowerBooks and PowerMacs running Mac OS X, which had NeXT’s technology at its core, in a matter of just a few years.

Later on, Steve Jobs began the process of turning Apple, the computer business, into a lifestyle product maker with products like the iPod, which was introduced in 2001, and the iTunes Store, which Jobs then called "a turning point for the music industry". This process continued in 2007 with the introduction of the iPhone, along with a change in the company’s name From Apple Computer, Inc. to simply Apple, Inc., reflecting the fact that Apple is no longer solely a computer maker. Three years later, Apple introduced the iPad, which had since then challenged the tablet market’s whole landscape.

Although Jobs will no longer be performing his duties as the company’s Chief Executive Officer, he will remain serving as the Chairman of Apple’s board. There, he’ll continue to exercise oversight over Apple’s efforts and undoubtedly keep providing his great insight for years to come.