Google, you just can’t argue that the search giant doesn’t touch our lives in more ways than we probably realize. If it’s not our Android smartphone, our Android tablet – some people bought one of those, right? – or the way we live in Gmail, the chances are you still find yourself hitting Google.com at least once a day.

The reason for that is search. Google has spread its wings so far and wide these days that it’s easy to forget what Google became so famous for, and that’s its ability to take the world’s web pages and organize them into some sort of database using that magic Google-fu.

Apple offers a couple of ways to use Google search in its iOS software, and across its iOS devices. The most obvious is the search bar in Mobile Safari, and the less obvious is the Spotlight screen just to the left of your Home screen. Both work well, and they’re nice and easy to get too. 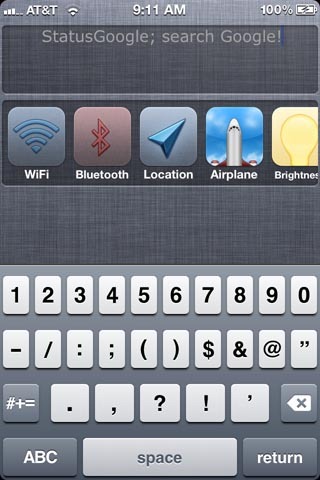 Should those not float your boat, there’s also Google’s own iOS app, though why you’d want to venture that far, just to have it open Safari, is beyond our feeble collective Redmond Pie brains.

There’s now a fourth option to add to the equation, and it even manages to leverage the power of the Notification Center at the same time. That option is StatusGoogle.

Now, before you get all excited and head on over to the App Store, you won’t find it. StatusGoogle is a jailbreak tweak, and as such can be downloaded for free from Cydia, the jailbreak app store of choice.

Once downloaded, all StatusGoogle does is add a new search bar to Notification Center, iOS 5’s new way of handling all those notifications we receive these days.

Once  installed, typing in your search query and hitting Return will throw you straight into Mobile Safari, with the Google search loading automatically.

It doesn’t get much easier than that, and we do wonder why Apple didn’t add a search bar to Notification Center in the first place.

We hope Apple will allow third party App Store apps to take advantage of Notification Center sooner rather than later, too.

Until then, it looks like the best way to take advantage of Apple’s new notification management system is to jailbreak your iDevice!

So, what are you waiting for?