Springtomize 3 For iOS 7 Released: The Only All-In-One Customization Tool You’ll Ever Need

Earlier this weak, the imminent release of Springtomize 3 was teased by its developer, Filippo Bigarella, and today, the famed tweak, which allows you to alter many elements of iOS in general, has just been released. It has taken a while for the iOS 7 update to arrive, but considering the improvements that have been made on what was an already a very thorough utility, it would seem that the wait has been a worthwhile one. Details on features, as well as download info, can be seen after the break!

Although new tweaks are regularly distributed via the Cydia Store, very few can boast the acclaim recognition of Springtomize. Having first arrived back when iOS 4’s jailbreak was made possible, it has seen many great updates since, but with so much having changed aesthetically with iOS 7, Bigarella has taken great care in producing the most exciting release of Springtomize to date.

As ever, you can tweak elements like the dock, folders, icons, status bar and lock screen to the nth degree, and even with new features like the Control Center, you can utilize Springtomize to modify the way it looks and behaves to suit your personal requirements.

If I were to sit here and list all of Springtomize 3’s features, this article would be a considerably long read, but suffice to say, this is one of the foremost tweaks for a reason, and if you’re into theming and altering the way the iOS UI appears, then you owe it to yourself to grab this from the BigBoss repository. 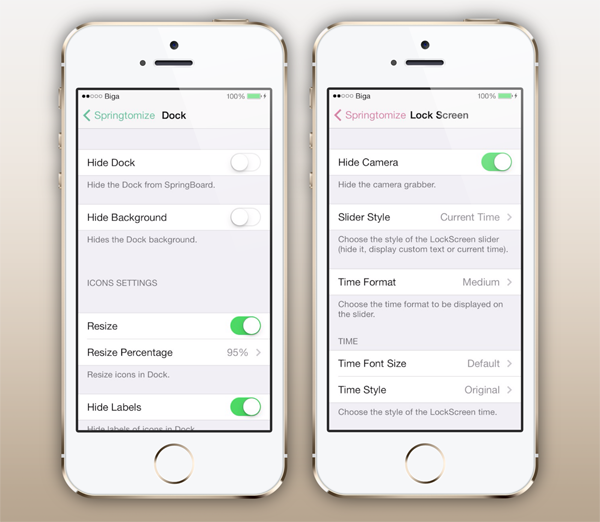 With regards to pricing, Bigarella offered little more info than the fact that it would "more than $0, less than $999," and thankfully, the final pricing bracket is notably closer to the former. If you own Springtomize 2 and purchased it within the last two months, Springtomize 3 is a free upgrade, while those who bought it outside the two-month bracket will have to pay a (still reduced) price of $1.99. New customers, meanwhile, can pick Springtomize 3 up for $2.99, which, while costly, is certainly better than $999, and undoubtedly still great value for money.