Speed Test: HTC One M9 Plus vs iPhone 6 vs Galaxy S6 [Video]

Everyone seems to be obsessed with speed, now more than ever. We want to do everything faster than the other guy, because faster is better. Usually, anyway.

So this obsession with speed inevitably spills over into the works of consumer electronics, with smartphones in particular ripe for speed-based competition.

We’ve shown you videos in the past of various flagship smartphones being put through their paces in an attempt to decide which is the fastest and, presumably, the best. If only things were always that simple. 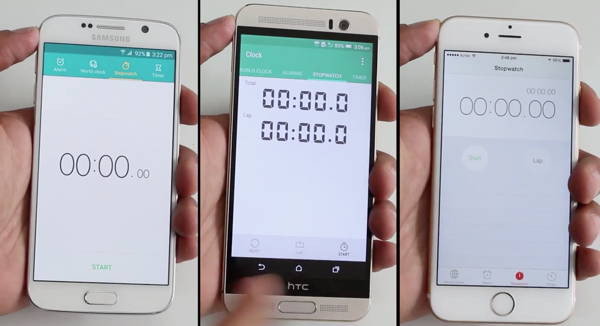 Having already shown you a video comparing the stopwatch-based exploits of the Samsung Galaxy S6 and iPhone 6 when compared with the HTC One M9, this time around we see that M9 replaced by the newer HTC One M9 Plus model which packs an octa-core 2.2GHz processor. In the last test, the HTC One M9 came out on top with a time of 1 minute 27 seconds, with the iPhone 6 coming in second at 1 minute 34 seconds, and the Galaxy S6 finishing last with a time of 1 minute 37 seconds.

So, how was it this time around?

Well, the test consisted of all three phones – Galaxy S6, iPhone 6 and the One M9 Plus – being used to launch a collection of the same apps with the time being recorded. Following that, the apps are then reloaded once more to test how multitasking works as far as app launching is concerned. None of this is overly scientific, but it should give you a good idea of who the King of the Hill is.

Spoiler: it’s not the HTC, and the iPhone 6 is super quick at waking multitasking apps up.

In both the initial app launching and subsequent relaunching, the One M9 Plus lagged being the iPhone 6 and Galaxy S6 which is no good if you’re looking for the best of the best. The best course of to take is to check the video out for yourselves and then decide whether it means anything to you, especially if your buying decision hasn’t been made yet.

We wouldn’t want to base anything on the strength of this video alone, no matter how bad things look for the HTC, but it’s clear to us that both Samsung and Apple have quick devices on their hands.

If you didn’t bother watching the video, then the result came out as follows: