Speed Comparison Shows Just How Much Faster Windows Phone 8 Is Than WP7.x [VIDEO]

Windows Phone 7.x was never considered to be a slow operating system. In fact, considering it only supported single-core SoCs, it was very smooth indeed, but one nagging problem was always the speed of app launching. That issue is never more evident than when compared with the much newer Windows Phone 8, and a video test complied by Winsource shows just how much of an improvement Microsoft has made to its smartphone OS.

In the video embedded at the end, the difference isn’t just menial. The load times of Windows Phone 8 apps are multiple seconds quicker than that of Windows Phone 7.5, and with some consumers loading apps hundreds of times a day in rare cases, these few seconds can quickly accumulate into minutes. The Facebook app, for example on this occasion, was around 15 seconds quicker on the new firmware than the old one, and regardless of how much of a difference that is, nobody should have to wait that long for a mobile app to load.

If you’ve been looking for a good reason to upgrade your Windows Phone hardware, the video below could be considered Exhibit A. Windows Phone 7.5 has been a great servant to many consumers over the past year, but Microsoft has, in Windows Phone 8, greatly improved user experience. The multiple-core support is evidently working wonders – despite bemoans from Nokia that any more than a single core was a “waste” – and if you’ve been off-put by Windows Phone (for whatever reason) up until this point, now would be a pretty good time to jump ship.

When it comes to using a smartphone, I feel UI responsiveness is by far the most important feature. In order for a device to be usable, apps have to load promptly, and lag has to be eradicated wherever possible. It’s a motif Android has tried, and to a degree, succeed in implementing with Jelly Bean, and now Windows Phone 8 is apparently reaching new heights, we have a seriously intriguing three-horse race shaping up between Microsoft, Google and Apple. 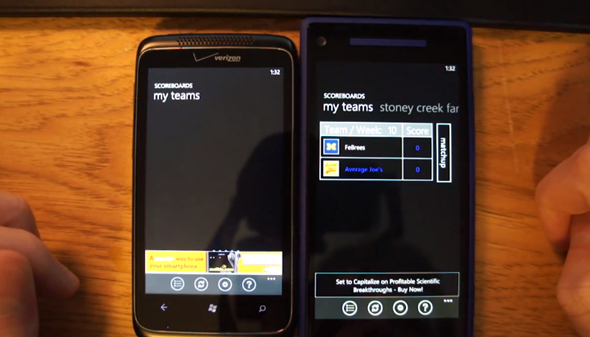 At this point, it’s unclear whether Windows Phone will be able to compete with Android and iOS due to lack of apps, but in terms of ease-of-operation, Windows Phone 8 is both slick, and innovative.