Apple has just announced two new iPhones in the form of the iPhone 6 Plus and iPhone 6, but while many had reported that the iPhone 5c would be instantly removed from the line-up, the Cupertino company has opted to keep last year’s releases retailing for the time being. As we noted in our earlier coverage, both 5s and 5c have been in receipt of handsome price drops, and with four smartphone options now on the table from Apple, we take a look at how each stands up against the other.

The iPhone 6 Plus is the undoubted king of this quartet. It’s similar to the iPhone 6 in a number of ways including design, but as we suspected in the run-up to announcement, the Plus stands for more than just a but of extra display real estate. 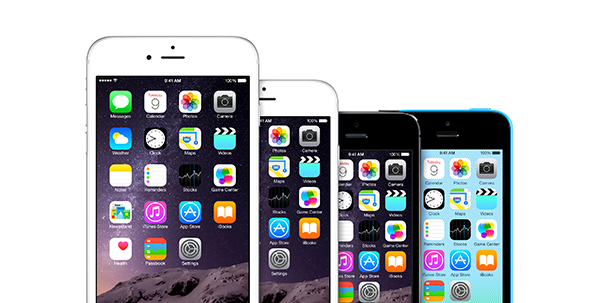 Featuring a better, OIS-packing camera, the device also runs on a slightly different version of iOS, and as such, UI elements animate in a decidedly more iPad-esque fashion. In both portrait and landscape mode, the iPhone 6 Plus looks like an iPad mini mini, and given the better touted battery life, it seems a definite winner for productive folk.

The 4.7-inch iPhone 6 will likely serve as the most popular, flagship model when they both go on sale on September 12th, and despite its shortcomings versus the Plus, is still a drastic improvement over the iPhone 5s. With the A8 processor offering a 25% increase in processing power over the iPhone 5s’s A7, we’re not talking about minor gains here, and with the graphics performance up by 50%, gamers and video lovers will be in for a real treat.

It’s only when you begin to look at the specs and features of the iPhone 5c that you get a true reading of how far Apple’s smartphone has come along in just two short years. Considering that the iPhone 5c is essentially an iPhone 5, the performance level increase since the 2012 release is quite exceptional, and with Apple already boasting second-generation 64-bit coprocessors, the rest of the field is certainly playing catch-up in this regard.

Below, you can take a side-by-side look at the four currently-available iPhone models and decide for yourself which once fits your requirements. For sheer performance, it’s hard to argue with the iPhone 6 Plus, but for value and choice of finishes, you may instead wish to opt for the iPhone 5c: