For those who follow the developments within the automation and control industry you will no doubt be familiar with Crestron, one of the leading providers of control and automation equipment who have systems in homes, hospitals, offices and schools around the world. 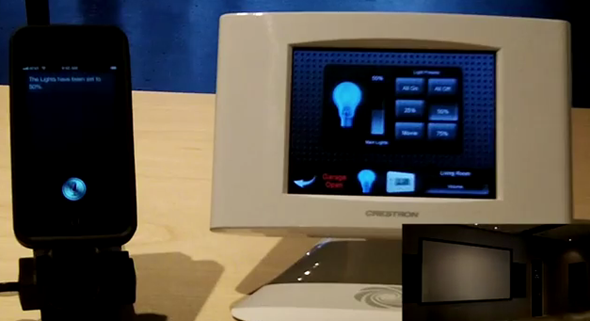 The company developers hardware which includes programmable touch panels, keypads and lighting control systems which can be installed into bespoke fit outs for pretty much any building type. At the start of December 2011 we brought you an article which showed how a keen techie had managed to combine SiriProxy with iobridge with X10 widgets to combine his lights and web enabled appliances in his house. Using an amalgamation of these services and technologies he managed to create a a basic, but effective voice controlled home automation system.

For those who require a little bit more from their home automation system, and are willing to make a significant financial investment then the Crestron systems make the perfect installation. The Crestron hardware is widely considered to be of the highest quality, but a touch screen is only as powerful as the software behind it. A custom installation company in Little Rock has produced a video which showcases the advanced options that are possible when using Crestron equipment to form a home automation system.

Carnes Audio have integrated the Siri assistant on an iPhone 4S into a Crestron system, demonstrating the powerful commands available. Not only does the system use Siri to turn the lights either on or off, instructions can be given to the iPhone 4S to set an exact illumination percentage for all lighting.

We have already seen examples of people using SiriProxy to control the thermostat in the home, but this has generally been limited to on or off commands. Carnes Audio have taken this a step further, as the video shows, by being able to specify an exact operating temperature for maximum comfort.

Perhaps the most exciting feature of this system is the ability to control a home theatre system using Siri. Turning the theatre on and off, changing input devices from projector to Apple TV and also being able to change the volume to any absolute percentage.

This isn’t the only time that Crestron systems have been married together with Apple devices. The iPhone and iPad App Stores have contained official applications for quite some time which allow home systems to be controlled via the iDevices. However, this is the first instance we have seen of custom installers offering spoken Siri controls to automate tasks in the home.