Well, that was quick! Just hours after we received news of the Siri port for iPhone 4, we’ve learned that another Siri port, this time for the iPad 2, is also under development.

Siri was announced at Apple’s Let’s Talk iPhone event at the company’s own campus in Cupertino, California as one of iPhone 4S’ major new features. It is a personal assistant that allows you to perform a variety of tasks on your iPhone 4S – such as settings alarms/reminders/calendar events, texting/emailing/calling someone, asking for definitions, directions (and more) – using your voice alone.

The news comes straight from the developer Sonny Dickson in a tweet sent out from his Twitter account a few hours ago in which he announces Siri for iPad 2. The tweet includes a photo (which we’ve posted below) which shows Settings > General > Siri.

Earlier today, we talked about the Siri port for iPhone 4. Its initial build, which was talked about by 9to5Mac, had sluggish performance but an updated build with working GPU drivers showed a lot of promise. At the moment, Siri for iPhone 4 does not accept any input. Reason being that Apple servers do not accept Siri voice input to be processed if it is coming from any device except the iPhone 4S. While Dickson hasn’t explained the state of Siri for iPad 2 port, we believe it can’t take input either. There will, hopefully, be a workaround for this in the future.

Keep in mind, though, that jailbreak developer MuscleNerd has stated that porting Siri over to older, unsupported devices isn’t possible without resorting to piracy. I am not clear on how porting Siri to these devices would involve piracy, but these developers know what they are doing so we’ll have to take their word for it.

Since developers from the jailbreaking community have always been against piracy, hence they’ll probably not port Siri over to older devices until a suitable solution is found. This doesn’t mean others can’t try though, as Sonny Dickson (and Steve Troughton-Smith of Siri for iPhone 4 fame) has done exactly that: 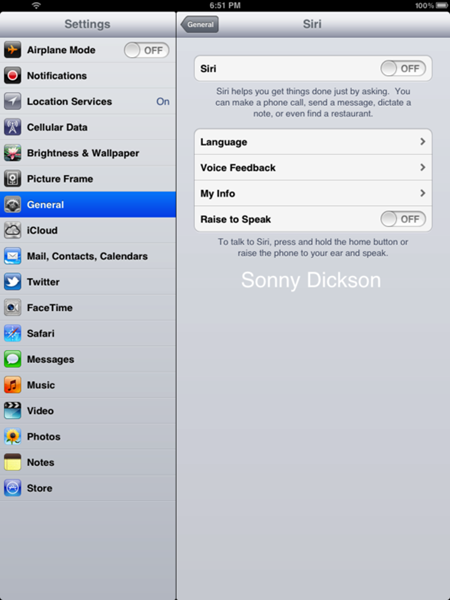 We’ll keep our readers updated on all news regarding the whole Siri for older iOS devices matter. We do not know exactly when these ports will arrive (if they arrive at all) but we do know that they’ll require jailbroken iOS devices to work. If you haven’t done so, you should follow our guide on how to jailbreak iOS 5 final.