The wait is over. Apple has now launched SIM-free unlocked iPhone 7 and iPhone 7 Plus models in the US almost one month after the initial release of the said handsets.

Except for the United States, SIM-free models of iPhone 7 and iPhone 7 Plus were available in all markets at launch. In the US, Apple chose to launch its iPhone 7 range in carrier-specific models. Consumers were able to select between T-Mobile, AT&T, Verizon or Sprint models, with each of the models having slight differences between them.

For instance, Verizon and Sprint models work on both GSM and CDMA networks while AT&T and T-Mobile only works with GSM networks. And while all of these carrier-specific models came unlocked ready to be used with any compatible network’s SIM worldwide when bought and paid in full from an Apple store directly, the SIM-free unlocked version on offer today doesn’t come with any SIM card pre-installed in the phone and like Verizon’s and Sprint’s model it can be used on both GSM and CDMA networks.

Available in the usual Jet Black, Black, Gold, Silver, Rose Gold colors and 32GB, 128GB and 256GB storage options, the SIM-free version of iPhone 7 and iPhone 7 Plus can be ordered starting today from Apple’s online store. 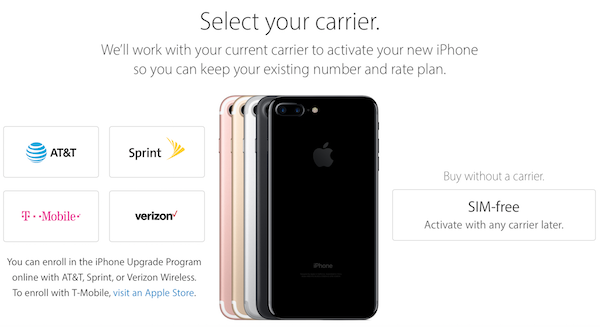 iPhone 7 and iPhone 7 Plus in the US are now available in SIM-free option in addition to previously available AT&T, Sprint, T-Mobile and Verizon versions.