I think pretty much every owner of a smartphone device who has the slightest interest in music will have heard of the Shazam service. For those that haven’t then let me introduce you to what I would consider the pioneering music identification service. Shazam launched in 1999 as a company who provided users with the ability to identify music via their mobile telephone. I remember the early days of the service when you had to dial ‘2580’ on your phone then hold the microphone up to the music to allow the service to gather a sample. It then connected to the company using your devices data connection and sent an SMS back to you with the name of the song and artist.

The service works by creating an acoustic fingerprint of the music it hears through the microphone and is then held in comparison against centralized database for a matching song. Shazam had great success in the United Kingdom in 2002 where it initially launched its 2580 service. This success has since been built upon with the launch of native applications for iOS, Android, Blackberry and Nokia devices with a java version also being available on a subscription based model for java capable handsets.

There’s no question about the popularity of the Shazam application, it has been downloaded over 165 million times since 2008, but there comes a point where the portfolio needs to be expanded. The music identification service is at a point where Shazam is considered the de facto application and is pretty much a complete product which does not require a huge amount of maintenance going forward. This has obviously allowed the company to focus their efforts on producing a new music player application which will need to compete against the stock music application on iOS devices. 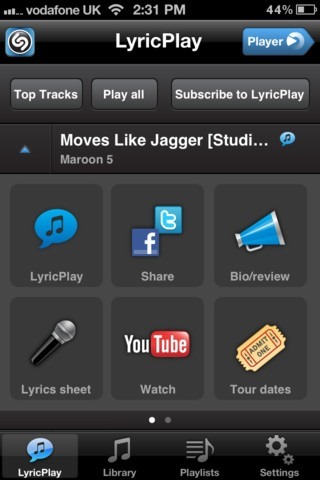 The new application is being billed as a free of charge replacement to the current iOS music app, and promises to offer much more functionality than is given by Apple. The included feature set includes the ability to have synced lyrics, artist biographies, smart playlists and the ever popular social sharing capabilities allowing users to share content with Facebook, Twitter and other services. The company is obviously trying to shed the ‘we are just a music identification service’ tag by now offering an application which could become central to any music lovers listening experience.

David Jones, who is Executive Vice President of marketing at Shazam had this to say on the new app:

This is a replacement for the music player on iOS devices. We have great technology and features we can wrap around any track, but it’s been so far limited to music you can discover out and about. We thought we’d bring the feature set and technology to music you have on the device already. 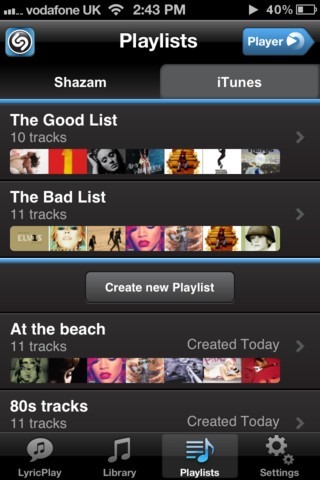 One of the features likely to catch the users attention and guarantee early adoption is LyricPlay which has previously been integrated into the music identification app after the company purchased a company called Tunezee. The integration of LyricPlay into the new music player application will allow users to view lyrics from songs directly in their own music library. This service requires licenses from the rights owners and at the time of writing is limited to approximately 50,000 sets of lyrics.

An additional feature that we have seen advertised so heavily in services such as Spotify, is the top tracks listings. Shazam have bundled this function into their new music application with the sole intention of trying to connect users with music and content that they may not be aware of and that is currently popular around the world. The in depth feature list certainly is a positive move, and the addition of social sharing to music can only be a positive move. It will be very interesting the levels of user adoption when this application is launched.