SBStickyNotes: A Cydia Tweak To Add Notes Directly To Your iPhone’s Springboard

Another day, another iOS 5 tweak and this time it is the turn of developer Fr0zen Sun to release his latest tweak to the growing number of jailbroken iOS 5 users. Thanks to the hard work of pod2g, the Chronic Dev Team and the iPhone Dev Team developers releasing tweaks intended for use on version five of Apple’s mobile operating system now have a much larger audience.

Fr0zen Sun is a developer who has been around the community for quite some time, and although his name may be unfamiliar to most the chances are jailbroken users have come across one of his tweaks during their many ritualistic Cydia browsing sessions. He currently has over fifteen small tweaks available within Cydia, of which the most notable are Home Button in Safari, Photo Images Upload, IconCommands and now SBStickyNotes.

So just what is SBStickyNotes I hear you ask? Well, the more discerning among you can probably work out from the title just what it is that this tweak does. The concept of sticky notes isn’t a new one, many applications and programs exist for the Mac OS X and Windows operating system, which offer the ability to create notes and ‘stick’ them to your desktop. I have even created websites which mimic the functionality of sticky notes using CSS3 and HTML5, so the concept is an old one. 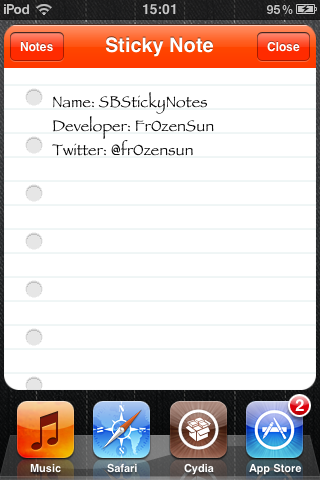 I would imagine that people who find themselves behind a computer screen most days on end have used a sticky note application in one form or another whether it be to create an easy access to-do list or just to pin a simple personal reminder to desktop. When talking about mobile devices a number of problems need to be overcome in order to produce a working tweak of this nature. 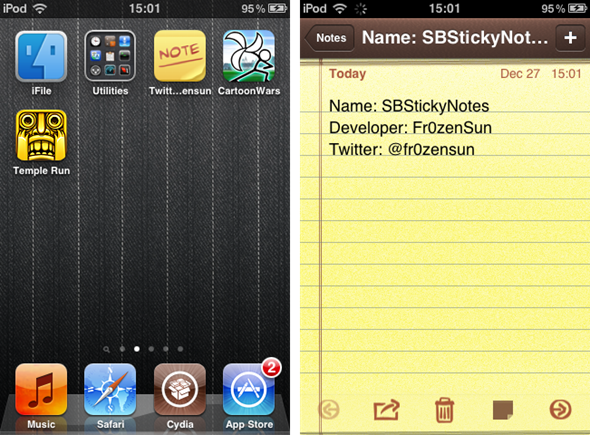 Fr0zen Sun has managed to produce a tweak which elegantly overcomes the problems associated with creating a sticky notes solution on a mobile device. The tweak hooks directly into the native iOS notes application to extend the functionality by adding a new option which pins the note to the Springboard. When the option is tapped the tweak creates an icon on the Springboard, very similar to how Safari handles adding a webpage to the home screen.

The icon pulls the title directly from the top line of the note and adds this under the Springboard selector. Tapping the icon beautifully animates the note into view, displaying all of the text in a window which looks like it has been influenced by the Tweet Sheet contained within the iOS 5 Twitter framework. The tweak also contains a preferences entry which allows you to control the animation speed and change the tint color of the note using RGB values.

SBStickyNotes is a nice example of how to overcome and handle a problem area elegantly. The tweak is available free of charge on the Big Boss Cydia repository and requires iOS 5 or higher.