In what might go down as one of the most bizarre decisions ever made by a Michelin star awarded restaurant, Quince in San Francisco has started serving food using iPads as plates.

Yes, that’s right, rather than allowing patrons to actually order food on a dedicated app loaded onto an iPad, this particular restaurant is trying to appeal to a younger crowd by literally bringing food to your table on one of Apple’s iPads. There’s no doubting the quality of Quince as a restaurant and the food and experience that it provides. The establishment was recently awarded a third Michelin star earlier this year, which in itself showcases the talents and qualities that the restaurant has.

However, there’s clearly a challenge being faced by the restaurant in how to attract a younger diner through the doors to sample the delicacies that are currently offered on Quince’s menu. Rather than experiment with lower prices or offer a menu that’s more tailored to the younger generation, this particular restaurant is choosing to pioneer serving actual food on an actual iPad.

And this isn’t just any food. You can’t book a table at Quince, walk in and expect to receive an iPad plate for just any meal. The restaurant is serving just one dish from the menu on an iPad called “A Dog in Search of Gold”. Don’t expect to receive an iPad Pro with burger and fries on top of it either. The idea here is to use the iPad to compliment the meal, which is described as being “white truffle croquettes on iPads playing videos of water dogs on the truffle-hunt” by Chef Richie Nakano.

So while you are tucking in those stunning truffle croquettes, you get to visualize the hunting experience that led to those truffles actually being found and made available for order. 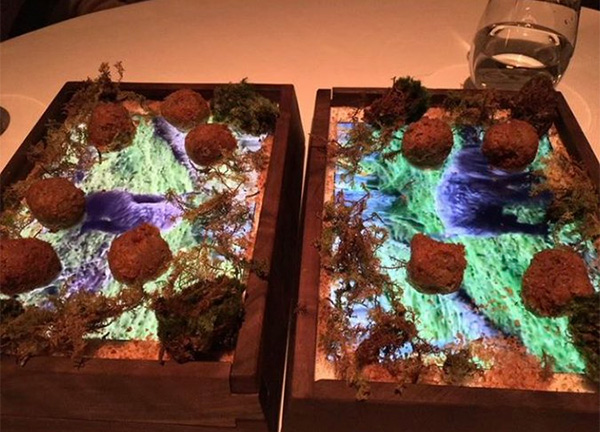 Aside from the fact that it seems like total madness to use an expensive piece of equipment like an iPad to serve food on, there are some clear and obvious concerns to be raised with this idea. Can the device possibly be protected against damage and abrasion from the customer’s cutlery? Also, are there any health and safety regulations in place to ensure that each iPad is washed thoroughly between servings to make it acceptable and hygienic for the next white truffle lover? This isn’t the first time a restaurant has used this tactic, but we aren’t exactly sure we want it to catch on.