Samsung Electronics has today officially introduced the world to the rumored Galaxy View, a device that the company says will “deliver an unprecedented mobile entertainment experience by streaming video and media content on the largest Android mobile device available on the market”. In short, the South Korean company has built a whopping 18.4-inch tablet that it hopes will appeal to consumers around the globe who are passionate about consuming content from streaming services like Netflix, Hulu, and YouTube.

JK Shin, who operates as the current CEO and Head of Samsung’s IT & Mobile Business, has said that his company is “committed to creating new possibilities and bringing our consumers the best mobile experience”. It’s difficult to imagine that the best possible mobile experience can be offered on a device that barely falls under the “mobile” category, but it does seem like a fairly impressive piece of kit if you can look past the sheer astronomical size of this Samsung creation. 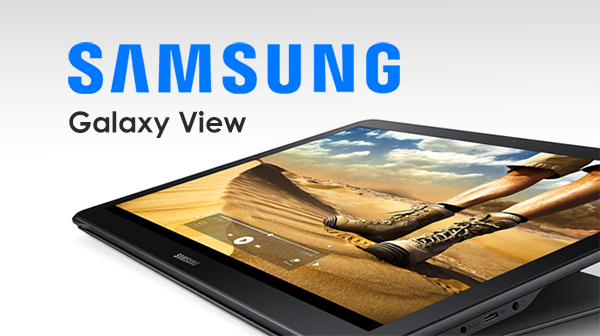 Anyone looking to purchase the new Galaxy View will receive a device that’s equipped with a huge 18.4-inch Full HD display which has been heavily optimized for media consumption. Samsung’s also marketing the fact that the View and underlying interface has been specifically designed with media consumption in mind. Something that is evident thanks to the dedicated Home screen for video that shows off content from a number of locations in one handy, easy-to-access place on the device. 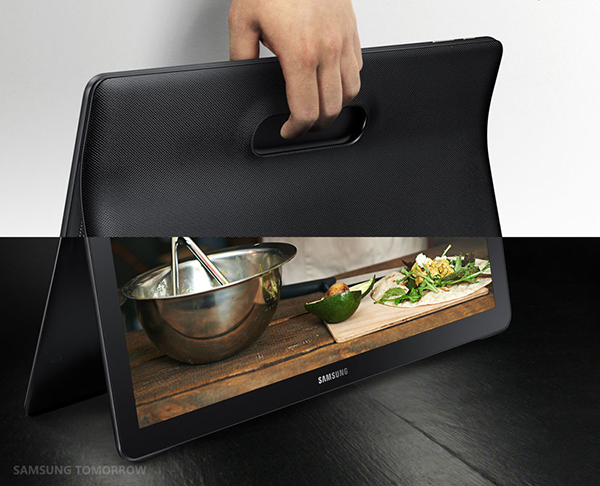 That huge display, and any media that is attempted to be streamed on it, is backed by a 1.6GHz Octa-core processor, and accompanied by 2GB of RAM. Samsung is also claiming that media consumers can expect to enjoy approximately 8 hours of battery life thanks to the integrated 5,700mAh battery pack. The 32 or 64GB storage options are supplemented by the inclusion of a microSD card slot that allows users to dramatically expand the storage capacity of the Galaxy View. There’s also the inclusion of a 2.1MP front-facing camera which should suffice for video calling purposes. 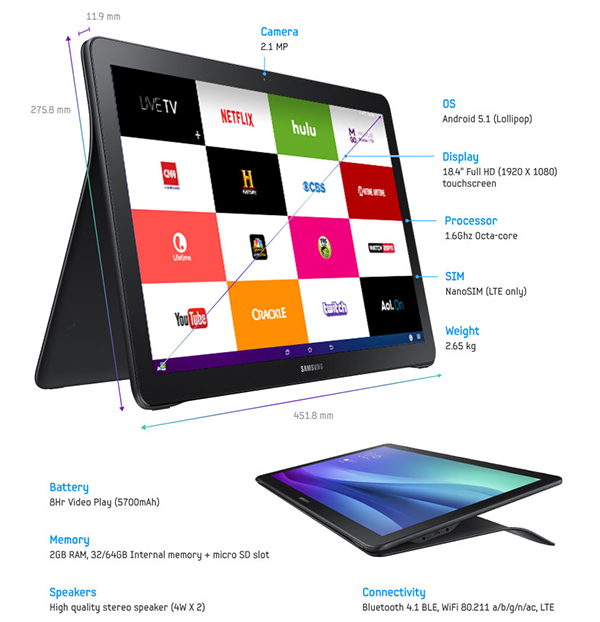 The tablet comes with its own “versatile 2-way stand” which gives you that perfect angle to watch videos for around 8 hours as suggested by Samsung, given the 5,700mAh battery packed inside the Galaxy View.

LTE versions of the tablet will require a Nano SIM, and the machine itself comes with Android 5.1 Lollipop pre-installed, which also features the aforementioned custom user interface that should hopefully appeal to those looking for that perfect device to consume media on while on the move. There’s no word from Samsung on availability or pricing just yet, but we’ll be sure to update you when it becomes available.