Samsung’s IFA gathering in Berlin, Germany, is fast-approaching, and as is usually the case in the run-up to a media event, the rumors and speculation regarding what’ll be revealed are arriving thick and fast.

Yesterday, we heard Samsung may introduce a "Galaxy S Camera," taking the design of the current flagship S III smartphone and offering it some of the high-end specs found in the Nikon and Canon standalones.

To add to those murmurs, it no appears as though the "transforming" hybrid Windows 8 tablet will make an appearance alongside the Galaxy Note II at this year’s IFA. The Korean outfit has shown glimpses of the slate in recent weeks, and by means of a Facebook post (how else do people communicate nowadays?), a date appears to have been confirmed for it. The company says of the device: "don’t worry, it’s just around the corner," and another teaser quips "ready to be smart?" while featuring the IFA 2012 text.

Although the blogosphere has reported heavily on Apple’s endeavors with the sixth-generation iPhone, iPad mini and iOS 6, Samsung has quite a few important products of its own to push to market. With the S III already out and having sold over 10 million units, the Note 10.1 tablet, Galaxy Note II phablet, and now, the Series 5 hybrid will certainly leave Android fans with plenty to think about.

The transformable tablet will work in much the same manner as Microsoft’s Surface. It can be used in the same manner as your current slab, although will feature an attachable keyboard as well as a stylus. The display of the Series 5 will be 11-inches, placing it at the higher end of the scale, and if it does make an appearance in Berlin this week, we’ll be able to get a glimpse of it in all its glory. 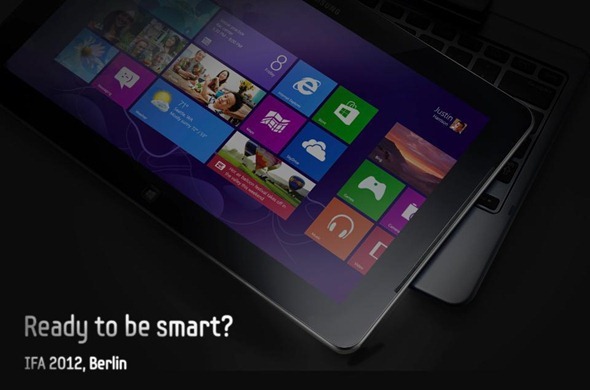 Just like Apple, Samsung has quite a few products releasing in the same time period, and although perhaps not as famed for its sky-high prices as its Cupertino rival, it’s still unlikely consumers will be able to purchase all at the same time. The Note II – being something of a niche product, should still sell strongly, although it remains to be seen whether the Note 10.1 can yield the numbers – particularly when up against the Surface, Series 5, and that smaller iPad.