The smartphone and tablet markets have revolutionized the modern digital spectrum, but having become completely integrated in our lives, OEMs have sought new ways to digitalize every aspect of our existence. Along with Google’s work on self-driving cars, the Project Tango mapping and of course, the head-mounted Project Glass, numerous companies are trying their hand at smartwatches, but while Samsung was the first major outfit to follow the Pebble with its own wrist-worn gadget, the Korean juggernaut has also dreamt up its very own “Smart” pushbike.

It’s fair to say that not all of the projects currently being worked on will prove successful in the market. It is strongly suspected, for example, that Google Glass’s merits as an end user product are non-existent, and while the likes of the NYPD, Dubai Police and Virgin Atlantic have shown interest in its potential, the consumer buzz mightn’t stretch far beyond the hardcore techies testing the Explorer Edition. 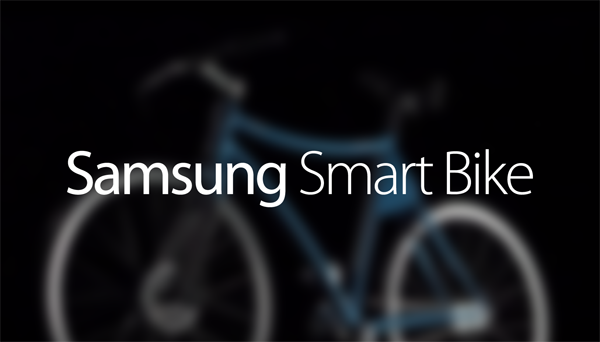 Samsung’s Smart Bike, right off the bat, seems like something that consumers could take to, integrating with your smartphone to deliver accurate analyses of your bike ride. But it’s much more than just a glorified tracker.

Among the technical components, the Smart Bike is complete with laser beams that project a bike lane for the rider where one doesn’t exist. This advocates safety for cyclists, who are among the most vulnerable on the roads, whilst also adding to the Smart Bike’s effortless “cool” factor.

It looks like a city bike, and would likely be marketed as such if the demonstration of the concept is anything to go by. A user could snap their device onto the handlebars using the magnetic mounting area, and after a little configuration, would be ready to take on the mean streets armed with one of the most advanced bicycles ever seen.

There’s an integrated rear-facing camera, too, allowing you to see what’s going on behind you via your device’s display. This means you don’t need to turn your head, and given the precarious nature of cycling on a modern road, having a digital rear-view mirror could prove essential in avoiding accidents.

It’s worth noting that this is very much a concept, rather than a product that is necessarily slated for release, but if it did, would you consider buying it?