The soon-to-be announced Samsung Galaxy S IV has fairly large shoes to fill when it comes to following in the footsteps of the previous Galaxy S smartphones. Although we have seen a number of so-called leaks of the S IV that show what the hardware could potentially look like, it has long been speculated that Samsung could be planning on introducing a totally unexpected feature that could set the device apart from anything else released this year. Until the phone is actually announced and shown off, it is anyone’s guess what that could be, but a recently discovered trademark filing in Samsung’s name could point to the next flagship Android device coming with some kind of 3D camera functionality.

There are a number of manufacturers who have attempted to get ahead of the smartphone race by implementing 3D based features in their devices. The fact that we very rarely talk about them tells suggests that they were launched at a time when the market just wasn’t mature enough to adopt that level of tech. This latest Samsung filing seems to be centered around the inclusion of a 3D camera that is capable of shooting movies and capturing three-dimensional images.

If the information from the patent office is being interpreted correctly, then the new technology could be rolled out as part of the hardware specifications of any new premium Samsung smartphone, tablet, digital camera and other products such as a smart television set. The timing of the trademark application is leading a lot of corners to suggest that it fits in perfectly with the company’s intention to introduce the latest in the Galaxy S series of smartphones at a dedicated event on March 14th. 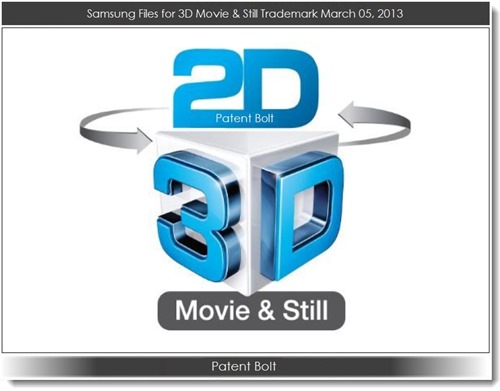 With the announcement event set to happen this coming Thursday we don’t have to wait much longer to see what’s in store for the Android world. At least, the latest teaser has left us at the edge of our seats.