Ever since the Samsung Galaxy S II became available in Korea and Europe, many in the United States have been wondering when the new smartphone would finally reach the country’s carriers. That moment has arrived, with the announcement that the Galaxy S II will be available on Sprint, AT&T and T-Mobile this fall.

The Galaxy S II is Samsung’s newest Android smartphone that’s on the cutting-edge of the smartphone market, both hardware and software-wise. The Galaxy S II sports a 1.2 GHz ARM Cortex-A9 processor, 1GB of RAM, 16GB of internal storage, an 8-megapixel camera with flash capable of recording 1080p video and a 2-megapixel front-facing camera. This beast is also capable of outputting fully uncompressed 1080p video via HDMI.

If you live in the United States and have been looking to get your hands on one of these smartphones, you will not be able to, on three carriers: AT&T, T-Mobile and Sprint – essentially every major US carrier except Verizon. Interestingly enough, the device shows some slight design differences in each carrier, aside from the carrier’s logo, as you can tell from the picture below. 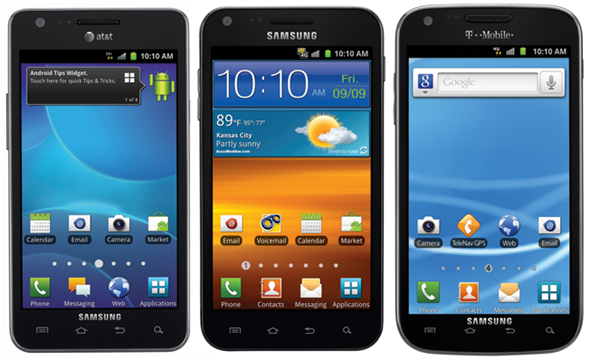 No matter the carrier, the Galaxy S II will feature 4G-esque connectivity with WiMAX support on Sprint and HSPA+ on T-Mobile as well as AT&T. All Galaxy S II devices will also have access to on-demand “premium content” free of charge from several of America’s major TV networks, namely NBC Universal, Paramount, MTV, Warner Bros., CBS and FOX, through Samsung’s Media Hub. In addition to free content, the Samsung Galaxy S II will also support movie rental services such as Android Movies and Netflix streaming right out of the box.

The Galaxy S II comes with the newest version of Android, known as Gingerbread, baked right in. On top of Android, Samsung offers its proprietary TouchWiz 4.0 interface, which is supposed to make the operating system smoother and easier to use, yet many high-end users would rather like to use Android without any customizations. Nonetheless, this feature will likely be welcomed by Samsung’s target demographic, mainly comprised of people who just want a really user-friendly, yet powerful, smartphone.

There’s no wording yet on price, yet expect it to be along the lines of a subsidized iPhone 4. Who is going to be the first to get this phone?