A plethora of apps, programs and devices were showcased at this year’s CES – many of which are unlikely to ever see the light of day in the actual consumer market.

There were some weird and wonderful sights, that’s for sure, and one in particular caught the eye of many on looking tech-enthusiasts. Recipient of the prestigious Best Software award at CES 2012, BlueStacks allows Android apps and games to be enjoyed full-screen on a desktop PC.

It initially launched in Alpha last October, and was downloaded over a million times during that initial three-month stint. Launched today, the very first Beta version uses the company’s Layercake technology, allowing Android apps to run on x86-based PCs.

BlueStacks put the initial Alpha on hold in order to properly prepare the public Beta, so I thought I would give it a little test out in order to see how far it has come since CES.

Firstly, I downloaded the installer from the BlueStacks site. Once downloaded, I ran it, and was left to mull over the million downloads milestone and the CES award once more, as the remainder of the necessary files were obtained. If you opt to install BlueStacks and, like me, you’re on a relatively slow connection, this is probably the time to hit the kettle and grab yourself a coffee. Note also, there’s no download progress bar, so you may feel like you’ve been abandoned in blind wait. I know I did.

Nonetheless, after a little thumb twiddling, the app installed smoothly, leaving me with a dilemma regarding which app I was going to test out. Being the tightwad that I am, I wasn’t willing to pay for an app, so I did a little hunting. In order to really test the pedigree of BlueStacks, I went for a fairly resource-intensive game as opposed to, say, a passive social app, and came up with the modern classic that is Cut The Rope (Free).

While my PC doesn’t burst at the seams in terms of hardware, it runs all my PC games without a flaw, so, I presumed, should be more than adept to cope with a miserly Android title.

As it fired up, I was rather apprehensive. I’d never tried a touch-only port to a PC of this kind before, although since Rovio managed to release Angry Birds on virtually every platform without sapping most of the fun, I tried to focus on the positives.

BlueStacks automatically gives you a toolbar at the top of your screen, which protrudes like OS X’s dock when you hover over its icons. It’s easy enough to remove, and you’re left with the main application pane. 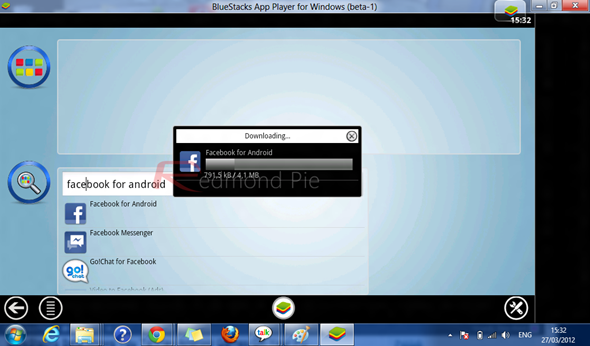 Unfortunately, after trying lucklessly to run Cut The Rope, I opted for the Facebook app just to get things going. I had already spend a considerable amount of time downloading and installing, so went with the old faithful. After three erroneous attempts, I was logged in to Facebook for Android. 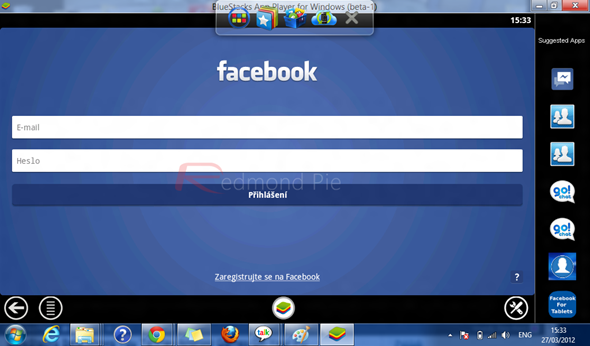 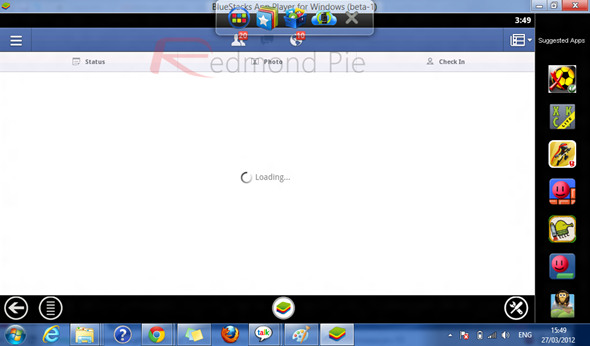 Despite the toil in actually getting an app running, it ran extremely well. Scrolling was nice and smooth, there were no dodgy pixelated areas where the orientation had got a tad messed up; and in what was, for me, a rare visit to the social network that is Facebook, it felt as though I was using a rather well-polished desktop app.

With my hopes somewhat restored, I wanted to have one last stab at an Android game. I went for Jump Ball Extreme (nope, never heard of it, either), and after a short download period, fired her up. A basic concept – much like that of the popular Doodle Jump, involves keeping a soccer ball in the air by means of clicking the mouse (or tapping, on mobile devices). 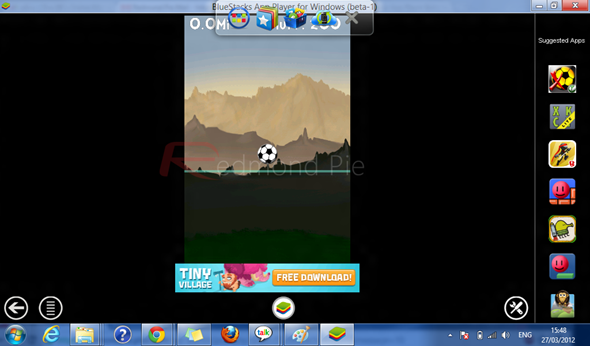 It worked smoothly, with crisp sound (and, unfortunately, ads), and while not the same experience as playing on an S II or Desire HD, it’s still a very fulfilling experience for those with much time and little stimulation – like myself, arguably.

Having tested BlueStacks, I can definitely see how the possibility of undercutting PC games is very real predicament. Mobile versions of apps are notoriously cheaper than their desktop counterparts – usually around one-fifth of the price. Thus, the tidy little premium being made by Rovio etc may be in serious jeopardy. As HandyGames CEO Markus Kassulke rightly points out:

A billion PCs is a huge potential market for any developer . . There is potential to make good money from the additional app discovery and usage.

As well as searching within the app for Android titles, one can sync with an Android device, allowing those apps already purchased to be transferred to a PC.

Taking into consideration desktop apps cost $30 compared to an average $6 for mobile, it’s hardly any wonder BlueStacks has been awarded its title, and we highly recommend you try out the beta version.