Samsung has adopted a yearly cycle of releasing new flagships in its Galaxy lineup of Android smartphones, and this year was no exception, brining to Android fans all across the globe the new and fabled Galaxy S4. While the latest king has already taken the throne and caused its predecessor, the Galaxy S III GT-I9300, to step aside in the smartphone arena, there’s no denying the fact that the device still remains a very capable and powerful one, fulfilling the needs of millions of users out there. Another testament to the fact is that Samsung is continuing to bring newer firmware for Galaxy S III International, with the latest one being released just this month, coming with PDA build I9300XXEMC2 and Android version 4.1.2. While the Galaxy S III still has to see an official Android 4.2 Jelly Bean update from Samsung, there are open source, community driven projects available that can let you taste the latest Android on GT-I9300. If you don’t opt that way, you may want to root your device on the latest firmware, for which we offer you this guide.

Before we get to the actual rooting process, allow me to clarify that as of this writing, I9300XXEMC2 is the latest officially available firmware for the international version of Samsung Galaxy S III GT-I9300, distributed by Samsung through Kies. It comes with Android 4.1.2 Jelly Bean, and offers improvements over previous versions like faster app launcher redraws, faster launching of applications, improved performance of the Phone and Contacts apps, better RAM utilization, and other general enhancements. The battery life also seems to have improved, but will vary from one usage scenario to the other. 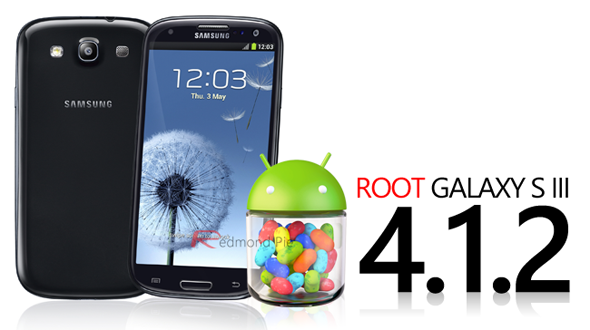 The root method that we will opt for here will make use of Chainfire’s CF-Root, which is arguably the easiest rooting technique for a huge variety of devices by now. Do understand, however, that while this method is tried and tested, we or the developer cannot take any responsibility for any damage to your device as a result of following these instructions. Proceed at your own risk.

Step 1: Download both Odin3 and CF-Auto Root packages from the link above. Extract the contents of the root package to a location of your choice.

Step 2: Launch Odin3, click the PDA button and select the .tar.md5 file that you extracted from the CF Root package.

Step 3: Make sure that Re-partition is unchecked in Odin3, and that nothing is selected in PIT.

Step 4: Turn off your Galaxy S III and put it in download mode by pressing and holding volume down+power+home at the same time, and then pressing volume up for confirmation.

Step 5: With your device in Download Mode, connect it to the PC using the USB cable. If all went correct, Odin3 will detect the device, indicated by a COM address in the top left corner of Odin3.

Step 6: Double check that the correct PDA file is selected and that re-partition isn’t checked, and hit the Start button to begin flashing the rooted kernel.

Step 7: Once the flash is complete, the phone will reboot and enter recovery mode, automatically initiating the rooting procedure. It will reboot once more.

That’s it – your Galaxy S III GT-I9300 is now rooted on the latest XXEMC2 firmware. Enjoy!