Report: Apple To Hit $1 Trillion In Total Revenue From iOS This Year

Apple has an expansive – and constantly growing – product range, which includes hardware like iPhone, iPad, Apple TV, and Apple Watch, Mac, but there’s really only one of those products on which Apple can rely to continually produce staggering revenue.

In the last ten years, Apple’s iPhone has not only cemented its place amongst the top smartphones on the market, but has also proven to be a total cash cow for the Cupertino-based giant, with a new report from intelligence firm Asymco, suggesting that the company is on course to surpass $1 trillion in total revenue from iOS products and services by the end of the current year.

The report suggests that total revenue from iOS products – such as the iPhone, iPad, and iPod touch – will sit at around the $980 billion mark by the middle of the current calendar year. That number is staggering and eye-watering in itself, but gets even more impressive when you factor in the fact that the intelligence company believes that there is an additional $100 billion in revenue from iOS services to add into that mix, meaning “iOS will have generated over $1 trillion in revenues for Apple sometime this year.”

The report has also provided an insight into the success of iPhone outside of the fact that it has managed to accumulate so much revenue in its first ten years. That success has involved shifting more than 1.2 billion units as part of cementing itself as one of the most popular products of all time:

In its first 10 years, the iPhone will have sold at least 1.2 billion units, making it the most successful product of all time. The iPhone also enabled the iOS empire which includes the iPod touch, the iPad, the Apple Watch, and Apple TV whose combined total unit sales will reach 1.75 billion units over 10 years. This total is likely to top 2 billion units by the end of 2018. 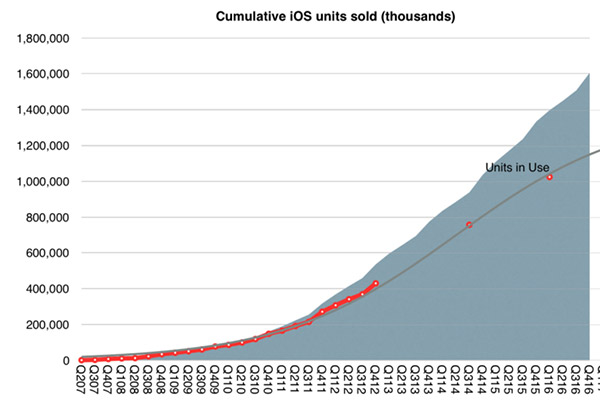 Information about the revenue generated by iOS devices is interesting enough, as is the fact that Apple could be on course to shift a total of 2 billion units by 2018, however, the information pertaining to the number of sessions on an annual basis is mind-blowing. With an assumption that there are 600 million active devices, Asymco is suggesting that users of those devices account for 17.5 trillion iPhone sessions each year, with each device unlocked 80 times a day.