ReFlex Is The World’s First Flexible Smartphone, Lets You Control Apps By Bending The Screen

It was really only going to be a matter of time until we got introduced to the world’s first smartphone that actually introduces a sensible case for bendable technology. We’ve been privy to prototypes and concept designs in the past that introduce a flexible aspect into the mix, but the ReFlex prototype, coming courtesy of a bunch of academics out of Queen’s University in Canada, is probably one of the first designs that we’ve seen that actually puts forward a believable case for why this type of technology should potentially be considered for smartphones of the future.

One of the first things that you will notice about ReFlex is that it has actually been built with technology embedded that can detect and act when the screen is being bent by the end-user. The 720p LG flexible OLED display has been kitted out with a haptic actuator that is in place to alert the underlying operating system when a bend has been detected. Rather than simply integrating bendable display technology for the sake of it, the ReFlex has a system in place that can then perform specific actions after detecting that the device has been bent. 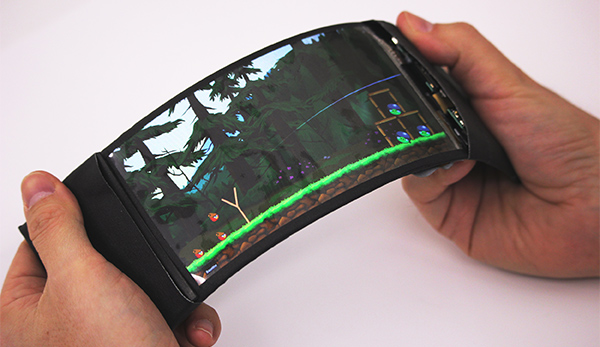 Roel Vertegaal, who is one of the individuals involved in the ReFlex project, discusses the implementation of a device that bends for a purpose, rather than just for the sake of bending:

This represents a completely new way of physical interaction with flexible smartphones. When this smartphone is bent down on the right, pages flip through the fingers from right to left, just like they would in a book. More extreme bends speed up the page flips. Users can feel the sensation of the page moving through their fingertips via a detailed vibration of the phone. This allows eyes-free navigation, making it easier for users to keep track of where they are in a document. 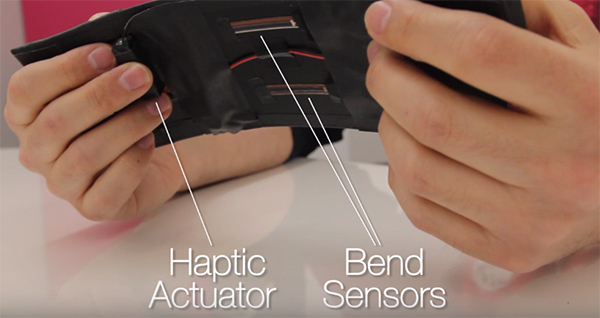 There’s a genuine sense that a great deal of thought has been put into the use case of a flexible device of this nature, and how it could actually tangibly benefit users rather than simply being a “cool” feature with no real-world validity. A separate set of sensors that live behind the integrated LG display, are able to detect the force of the bend, and therefore trigger the OS or a running app to act accordingly.

We’ve seen a number of companies explore the potential of a curved smartphone, as well as concepts popping up for foldable devices. The ReFlex could be the first solution that we’ve seen that isn’t simply a commercial gimmick.