Real Racing 3 has finally arrived for iOS and Android in the U.S., and is available to download right now from the respective stores of each platforms. Being free to play, it’s sure to attract a large audience, and if you enjoy the likes of Asphalt or Need for Speed, then Real Racing 3 is a release you’ll most certainly want to try out.

If you’ve played any of the first two titles, then you’ll already know why Real Racing 3 is one of the most anticipated mobile releases of the year. But for the benefit of the uninitiated, it’s a revered series which arguably trumps most of its rivals in terms of graphics and gameplay, with extremely lifelike maps and cars. In essence, it could be seen as the mobile spawn of Gran Turismo, and if you caught the iPhone 5 launch event back in September, you’ll already have seen why it’s more than worthy of such a comparison. Launched to a limited number of app stores back on February 13th, the title is now available for everyone, specifically for those residing in the U.S., and can be grabbed from the links at the end of this post.

Unlike Real Racing 1 & 2, Real Racing 3 is free to download, with many cars and tracks (hundreds, in fact), available through in-app purchase. Of course, you can use your dedication and endurance skills learned from the likes of Gran Turismo to slowly bleed out these extra elements through hard work, but for impatient folk, it may just prove easier to bite the bullet and pay that minimal fee for the odd track here or BMW there.

Often, the as-promised contemporaneous release of the iOS and Android versions is altered at the 11th hour, with the latter often hit with an unforeseen delay (read: Max Payne), but this time around, EA has catered to each half of the Big Two mobile ecosystems. 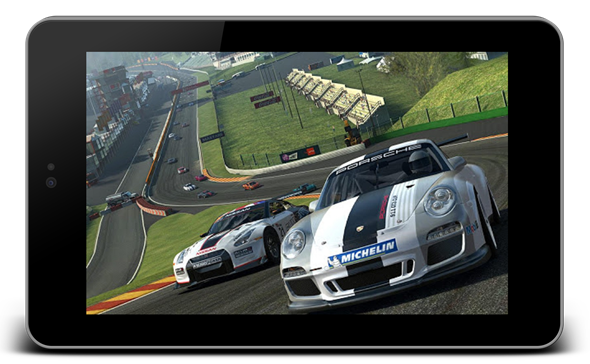 All racing fans, bar none, should have Real Racing 3 on their mobile device, and if you feel as though you fall under that particular category, do check out the direct download links provided below.

(Source: Real Racing 3 for iOS on App Store and Android on Play Store)