Although, thanks to the most recent major update, the iOS home screen isn’t as boring and uneventful as before, it still draws criticism for its one-dimensional nature and general lack of customizability. Even with a jailbreak, you’re never quite going to be able to enjoy the eclectic mix of launchers, widgets and multiple home screens a la Android, but thanks to the recent work of Evad3rs, you can bring a little bit of life to your home screen. Random Icon Flip, as you will probably have gathered, will flip random icons around for no other reason than aesthetic enjoyment, and although it is almost as pointless as it sounds, does help to rejuvenate the otherwise monotonous view. Originally released back in 2011, the tweak now has received an update, bringing with it support for iOS 7, Apple’s latest and greatest mobile OS.

Once installed, your icons will whimsically begin to animate, and although this will no doubt give you something other than  general blandness to gawk at on a minute-by-minute basis, one inevitable trade-off of Random Icon Flip is that it will likely drain on your battery. 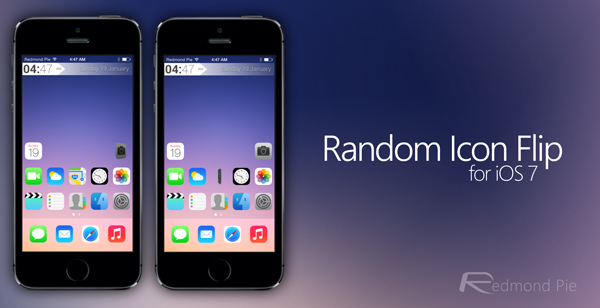 Still, if you’re willing to accept a little less by way of power retention, then this is one of the best ways we’ve seen so far to inject a little life into proceedings. Sure, Apple finally brought some animation to iOS 7 with the moving wallpapers, but if you want to take things a step further, then this tweak is definitely worth checking out.

Once installed, there are no options to configure, which strikes me as rather strange. I mean, this tweak could go further and allow you to customize which icons flipped, as well as in which directions, and with such settings, the tweak could command a small fee.

Here’s a short demo of the tweak in action, just to give you an idea how it looks like when installed:

Nevertheless, it is free of charge, which is always nice, and can be found over at the BigBoss repository. With so many apps and tweaks already tailored only to iOS 7, it’s good to see that the developer of Random Icon Flip has considered those languishing on older versions, offering compatibility to those on iOS 4, iOS 5 and iOS 6, as well as the latest and greatest.

If you want to take things a little further on your iPhone’s home screen, then be sure to give Gridlock for iPhone and HomeScreenDesigner for iPhone a try.

Download it, give it a whirl, and be sure to leave your thoughts on the tweak via the usual channels.