When it comes to deciding which social network to use consistently on a daily basis, I have to say that Twitter annihilates Facebook every day of the week for me. Although I initially jumped on the Facebook bandwagon during the early days and still hold an active account to date, it is something I use sparingly, as day to day activities of people I used to know during my school days quite frankly bores me. Twitter on the other hand allows me to connect with people who have the same interests as me from all over the world, allowing knowledge to be shared and consumed, so anything that can provide quick access to the micro-blogging service can only be a good thing. 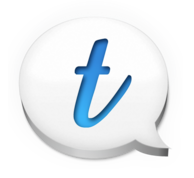 We have already seen a number of iOS apps like Tweet Time and InstaTweet which allow quick tweeting access on iOS, but there is also a decent option for Mac OS X users known as Quick Tweet. Quick Tweet is an extremely small and lightweight app that is housed on the Mac App Store and pretty much only offers one simple piece of functionality, which is to allow users to send a single tweet at a time to their network of followers. All Twitter and OS X users will have their favorite Twitter apps which they use regularly, with Quick Tweet in no way trying to replace those highly functional pieces of software, but what it does do is attempt to remove all the unnecessary timeline and messaging features when only posting a simple tweet is required. 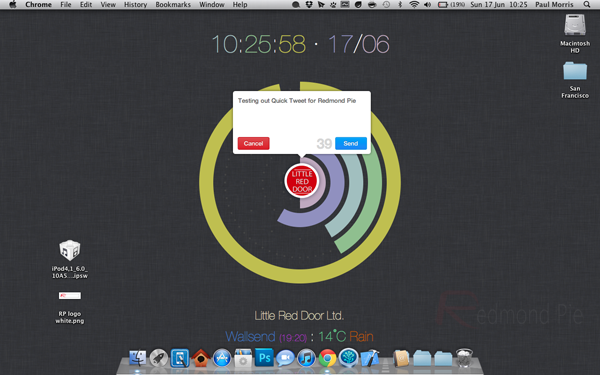 After installation, users are prompted with a nice little cylindrical icon type interface on the desktop that gives them the ability to log into a Twitter account through the usual sign-on processes. When the account has been authorized, the avatar of that account is then placed into the Quick Tweet interface and a simple click invokes the tweet compose sheet for text entering. The interface is extremely simple but functional, featuring only cancel and send buttons as well as the user’s account image and the number of characters left to be used. Simple, lightweight, attractive and efficient. 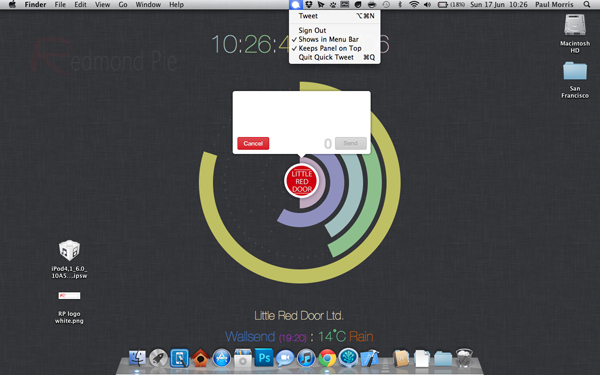 Depending on how Apple integrate Twitter into the final build of OS X Mountain Lion, due for release next month, applications like Quick Tweet could become unneeded; considering the native support for posting to social networks like Twitter and Facebook. However, until that time comes, Quick Tweet is an excellent option for those who enjoy simple and easy access to their online social lives and you never know, even with the release of Mountain Lion, some users may just prefer this third-party implementation. Quick Tweet is available as a free of charge download from the Mac App Store.