The first hands-on video of the Google Nexus 6 and Samsung Galaxy Note 4 has surfaced. The two phablets can be seen side-by-side for the first time in this short video, giving users a very important real-time feel of what the two devices look like when compared to each other.

The Nexus 6 having just been announced by Google, is the first Nexus phablet to hit the market. Earlier, we saw the first video of a Nexus 6 unboxing that was released by T-Mobile’s Product Manager. That video was made using Vine and didn’t offer a more hands-on glimpse of the device itself. As seen in this new video, the phone is only marginally taller than the Note 4 – which itself is one big device. However, this gives consumers interested in the Nexus 6 a fair idea of the device’s actual dimensions. 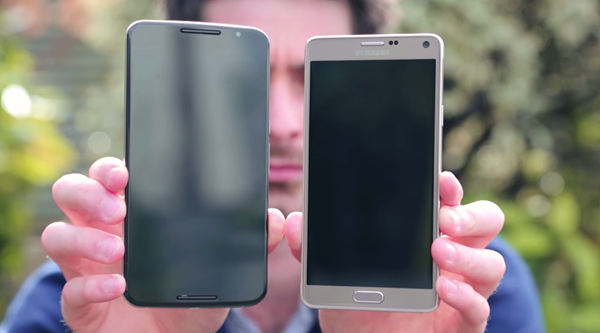 The two devices operate entirely different design languages, with the Nexus 6 opting for the much acclaimed Moto X design, while Samsung keeps it simple with the Note 4, by opting for a fairly similar design to the Galaxy Alpha. The Nexus 6 will be soon shipped with the latest Android 5.0 Lollipop, while the Note 4 should be running the Android 4.4.4 KitKat based on the TouchWiz UI out of the box. However, it is likely that Samsung will soon roll out the Lollipop update for its flagship device.

Under the hood, both devices operate more or less on the same plane, sporting quad-HD displays, the Snapdragon 805 chipset, 3GB RAM and an AMOLED display. Some regions will see the Note 4 carrying the Exynos 5433 chipset.

Overall, the Galaxy Note 4 edges out the Nexus 6 in terms of features such as the heart-rate sensor, and of course the fingerprint scanner. Samsung has always packed the Note series with some serious software features as well, fully functional with the included S-Pen.