The iPhone 5s may have been on the market for less than three months, but as we’ve come to expect with twelve month release cycles, talk of its eventual successor is already more than under way. We’ve heard a bunch of stories through the grapevine hitherto, including talk of at least one model with a larger display, and today, CTech has posted what it claims to be the frame of such a device.

While the likes of Samsung and HTC have continued to enlarge and augment the displays of their handhelds, Apple has been rather stingy. The iPhone 5 took the iPhone 4S’s 3.5-inch panel and added a couple of millimeters to it, bringing the diameter up to a current iPhone maximum of – wait for it – 4 inches.

Naturally, there’s a growing faction of iPhone fans that would love to see a bit more display real estate, and although the iPhone has reached its seventh year without any notable bump in this department, there’s a real feeling that this may be about to change.

CTech‘s findings, particularly this early on in the day, should not be taken as anything more than speculative. There’s no way of verifying the authenticity of the leak, but despite the questionable nature of this finding, it’s worth assessing what we have here.

The frame, as you’ll notice, is incredibly thin, and definitely shapes more like a Samsung Galaxy than an Apple iPhone. But the Cupertino company surely cannot continue to churn out these smaller handsets without ruffling the feathers of those seeking a larger form factor, and if Apple is planning on changing things up this year, it’s arguable that this kind of frame would be close to the mark. 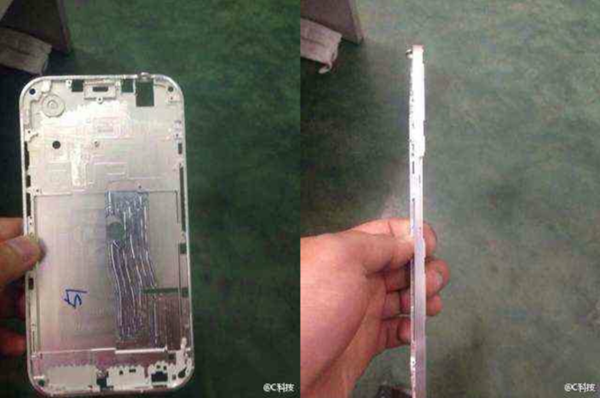 The iPad Air has shown that even when it seems impossible, Apple can still go thinner, and while the iPhone 5s is, despite its power, as svelte as ever, a device with a bigger display would have a larger surface area, which in turn could possibly cater to a more slender handset.

We’re approaching this report with a bit of skepticism for now, but what do you think? Is this indicative of what we’ll be seeing from Apple later on this year?

Please share your thoughts, as ever, via the usual mediums below.