Sony’s track record of providing solid updates to its PlayStation platform hasn’t always been a good one, but it seems that the company’s Japanese division is currently beta-testing a new version of the PS4 software that our gaming systems use. Version 3.00 of the software is currently part of an internal testing process, but details and screenshots have started to leak out, detailing what we can expect when the update reaches the public.

According to images translated by Gematsu, the PS4 version 3.00 update will bring a slew of new features to the platform, including additional game streaming options and features that will make it easier for parents to create new accounts for their children.

While the actual list of new additions in the upcoming 3.00 PS4 software is more lengthy than we are going to cover here, these are arguably the most interesting and ceratinly most likely to make a bigger difference in our day-to-day gaming lives, the first one, especially. 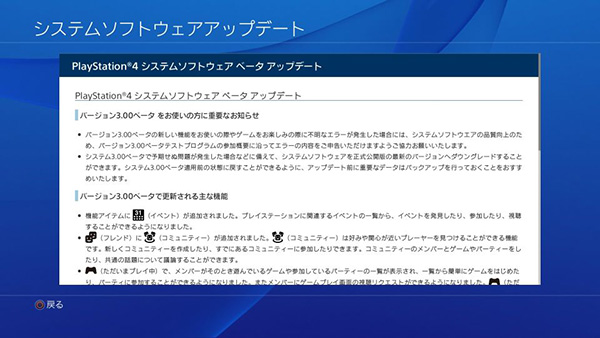 The first of those – being able to use YouTube as a game streaming option – is likely to be hugely popular among those who like to share their gaming experiences, especially professionals who have a huge fan following, while the ability to create sub accounts for children will be a big addition for those who have kids that like to use the PS4 for, say, Netflix streaming, etc.

There is no indication of when the new version of the PS4 software will arrive, but the fact that it is being tested enough to have information leak suggests that it shouldn’t be too far away from arriving on a console near you.