The story of Eric Garner has caught the attention of the world’s media over the past few days, and with tensions running high, mass protests have ensued across the United States. Apple’s Fifth Avenue retail store, which is considered the company’s flagship outlet, hasn’t escaped the attention of those with a point to make, and as such, has been caught up in a ‘die-in’, with hundreds of protesters teeming into the store while lying on the ground as a show of dissent at Garner’s apparent injustice. With placards galore, it’s not exactly your everyday sight, particularly within an Apple Retail Store, but on such a sensitive and controversial topic, those looking to be heard have taken to such tactics to achieve their intention.

In case you’ve been living under a rock and have missed the drama that unfolded during the latter part of this week, a grand jury declined to press charges against a police officer for choking Mr. Garner to death when attempting to restrain him. In a video that has been watched millions of times online, Garner can be heard pleading with the officer that he "can’t breathe," and it’s a phrase that has been echoed throughout the course of the subsequent protests during the days that have followed.

The protests have taken place across America, and on Friday, scores descended on the Apple Store on Fifth Avenue to vent their bemusement. Upon embarking the store, they laid down on the floor, stayed for about five minutes, and once they’d made their point and generated the coverage necessary to plug the cause, left in an apparently peaceful manner.

The idea, clearly, behind the ‘die-in’ is to raise awareness of the situation surrounding Garner’s death, and while Apple had nothing to do with it, the company happens to be one of the most iconic around the world. By invading its primary and most popular store, the protesters have achieved what they supposedly set out to achieve – that is, gain recognition for the Garner case – although while peaceful protests have been pivotal in defining history across generations, one suspects that in this instance, it’ll make precious little difference.

Here are a couple of photos of the whole scene: 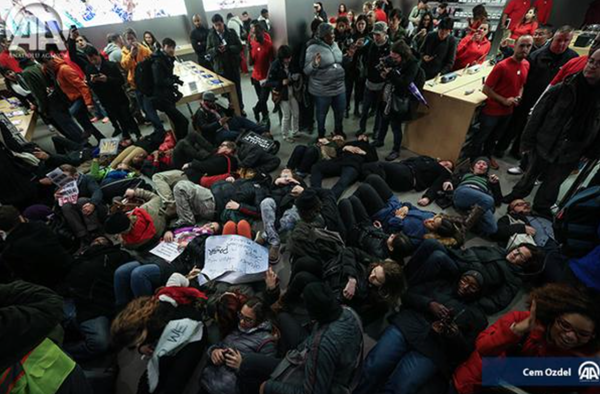 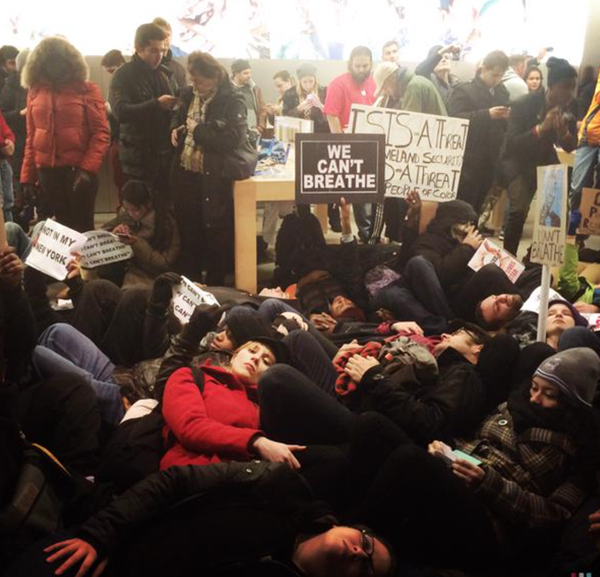 What are your thoughts on the matter? Do share with us in the comments section below.