Every now and then, a package lands on the Cydia store that can’t help but appeal and also provides some confusion as to why it wasn’t submitted to the official App Store to try and attract the mainstream user-base rather than just the jailbreak community. PreviewMaker is one of those packages, and we’re guessing that it doesn’t fully meet the human-interface guidelines as specified by Apple, but whatever the reason is, it is definitely going to appeal to jailbreak fans.

Apple has made it extremely easy for us to take screenshots of whatever is on our device’s display. Simultaneously pressing the home and power buttons conveniently snaps a screenshot and saves it to the camera roll for use at a later date. I think we would actually be surprised at how many people make use of this marvelous function of the iPhone, something that is certainly popular amongst app and theme developers as well as writers and reviewers who need to show off certain interfaces in a professional and elegant way. 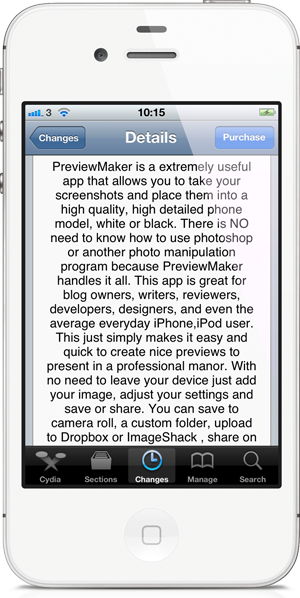 PreviewMaker is a more than a tweak, functions like a full-blown mobile app that we would come to expect from the official App Store. Its main purpose is to take all of those screenshots from the camera roll and throw them into a highly detailed hardware frame so that they can be used for a wide variety of purposes. The simple but elegant user-interface provides the perfect medium for users to get up and running quickly, featuring a tab bar setup that has the ability to save the image, share with a variety of social networks and tweak additional options. 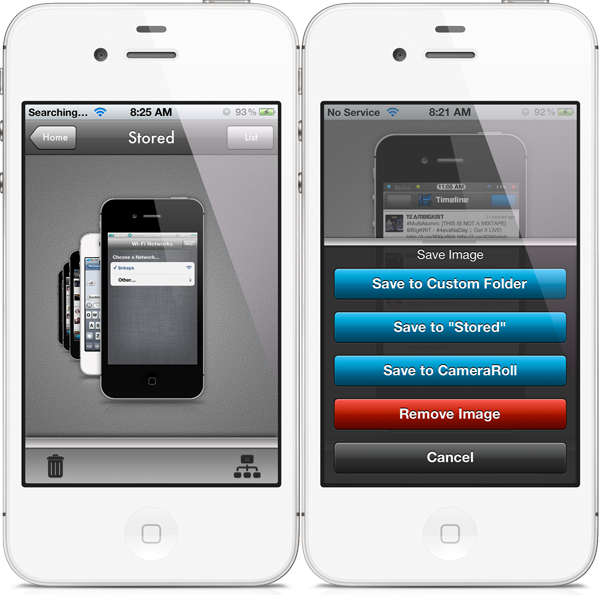 Once the image has been selected from the camera roll, users can choose either a gorgeous white or black iPhone frame and then apply some additional visual tweaks such as adding a watermark and amending the opacity, as well as adding or removing the iPhone glare that enhances the appearance of the creation. Auto detection is one of the great features of PreviewMaker. It may seem simplistic, but the package actually recognizes the orientation of the screenshot that is fed to it, meaning that it will automatically choose a portrait or landscape frame for your screenshot. How cool is that?

Saving the image to the device is a breeze and consists of two button taps, with the added ability to upload the photo to ImageShack, Dropbox or even share it with the Twitter world. It isn’t surprising that a lot of thought has been put into this package, and considering it has been designed and developed by two well-known jailbreak theme creators, it seems it has been created to scratch their own itch to show off their work. What works for them will definitely work for others. 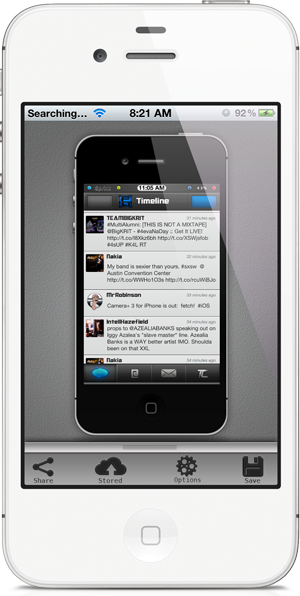 PreviewMaker is available to download from $1.99 from the ModMyi repository with no specific iOS version requirements being given.