An alleged press shot of a new powered-by-Android-4.0 Samsung smartphone has been “leaked”, Redmond Pie has learned. Details after the jump.

The news comes from Boy Genius Report – a blog dedicated to covering the latest and greatest consumer electronics – in the form of a short post in which they discuss the press shot sourced from Eldar Murtazin of Mobile-Review.com fame.

The press shot shows – what looks to us like – a Samsung Galaxy S II variant powered by Android 4.0 Ice Cream Sandwich. Yes, that just about describes this device. Unlike the Galaxy Nexus, it has real, off-screen capacitive buttons and it comes with the next version of Samsung’s popular TouchWiz UI on top which, honestly speaking, doesn’t look as nice as stock Ice Cream Sandwich. 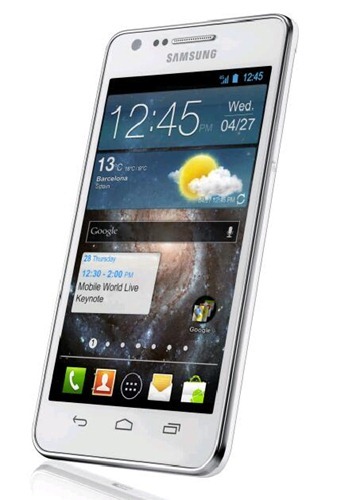 Samsung has plans to announce a new Android 4.0 Ice Cream Sandwich-powered smartphone at the annual Mobile World Congress trade show in Barcelona later this month. An image of the unknown device was published on Thursday by industry insider Eldar Murtazin, though no additional details were provided.

Murtazin has stated that this device will be formally announced later this month at Mobile World Congress in Barcelona.

There are, of course, chances that this may be fake, so take this story with a pinch of salt. Still, considering just how many Galaxy S II variants Samsung has released in 2011, we won’t be surprised if the Korean company decides to announce yet another variant.

But considering the credibility of Eldar Murtazin in the past, it makes us think otherwise. But, this is definitely not a Galaxy S III our gut feeling tells us as well.

Dozens of hot new smartphones will be unveiled in the second-third week of February at Mobile World Congress. Redmond Pie will be covering the event’s proceedings as they happen, so stay tuned!