Pokemon Go Appraisal Feature: Meaning, Chart, And Guide On How It Works

Here’s everything you need to know about Pokemon Go Appraisal feature, its meaning, chart, and a guide on how it actually works.

As you might expect, the recent Pokémon Go Update for iOS and Android brought with it the usual bug fixes and under-the-hood improvements designed to give gamers a more pleasurable experience, but as is usually the case, there was more to it than just regular bug fixes. The latest major integration came in the form of the new ‘Pokémon Appraisal‘ feature that allows gamers to get their captured critters appraised via Team Leaders. The feature is easy enough to interact with, but the cryptic sentences provided by the Team Leaders may be a little confusing to some. 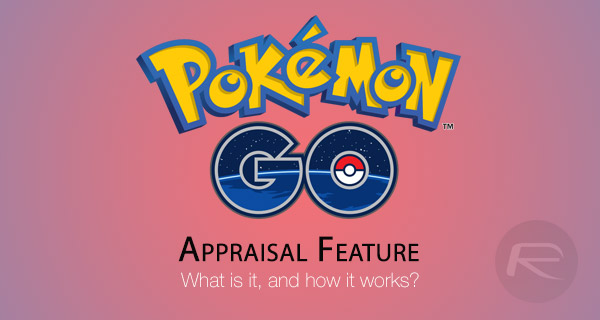 So, starting with Pokémon Go version 1.5.0 for iOS, or version 0.35.0 for Android, the new appraisal feature works by heading into the main menu and then selecting to view all of the Pokemon that have already been captured. After selecting a specific Pokémon, it’s then possible to tap the button represented by three horizontal lines and select the Appraise option.

This basically then prompts the relevant Team Leader – either Spark, Candela, or Blanche – to provide a slew of statements relating to the hidden values of the selected critter. But as mentioned earlier, what exactly do those statements mean? We’re going to have a look at the values behind those statements to see what each one means.

Whether you know it or not, each individual Pokémon has a set of values for things like attack, stamina and defense. Each of those values is represented by a number between 1 and 15, with the combined value being an accumulation of all of those individual values. The first lot of information provided by the Team Leader is a number between 0 and 45 that represents the total value of that Pokémon.

If the above is based on the combined value of attack, defense and stamina, then stage two of the appraisal is based on the highest ranking individual value of the selected Pokémon. As an example, if the highest individual value is related to the creature’s defensive abilities, then the Team Leader will make reference to that. If the creature has two values that equal one another, then that will also be outlined by the respective Team Leader.

The values assigned to each phrases by the the three Team Leaders can be seen in the chart below:

Just how big is your chosen Pokémon? Well, it makes perfect sense to assume that the size of the creature will have a direct impact on its ability to attack other Pokémon, or to defend itself against other attacks. This part of the appraisal will outline just how big the chosen Pokémon is, but in all honesty this is information that is already provided in the Pokémon’s information under the Weight heading.

And there we have it. The chart should give a better understanding of how each statement relates to the underlying value that is assigned to that Pokémon. These statistics and meanings should be consistent for the current version of the app at least, but will more than likely be there for the long haul unless the developers see fit to change something.