I would feel quite confident in going out on a limb and guessing that most owners of the iPad use the device in some form to scroll through albums of images and photographs. The large and engaging display, especially the Retina screen on the new iPad, is perfect for reliving the memories that photographs portray with the iPad also offering excellent multitouch and zooming features for viewing photo details. 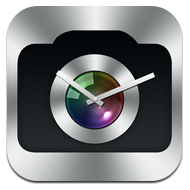 The Photos app on the iPad offers some support for organizing images, but for those who crave additional power over their life through pictures then it is possible that the PicStory iPad app is what you have been searching for. PicStory is an iPad-only app that aims to let users have powerful control over the elegant organization and management of photographs that are stored on the device. One of the great things about the app is that it can be used at varying levels of intensity and doesn’t necessarily require total control of every aspect to be a useful installation.

Designed and developed by SunHee Choi, PicStory brings powerful functionality and the ability to organize photo albums in a timeline fashion, as well as sorting through the options by title. A useful set of import options have also been built into the app and include the ability to add images to the software through the native photo library, Dropbox, iTunes and the Picasa web service. An app with import but no export capabilities would be pretty useless, and thankfully that isn’t the case with PicStory also being able to export albums to the iPad camera roll, Dropbox or Picasa. 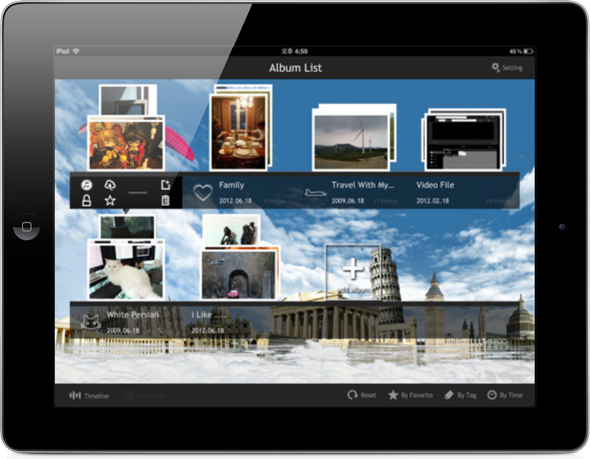 Album security has also been taken into account with the inclusion of a lock mode that can be applied to selected albums, essential for those albums which may contain photographs of your children or other imagery that you don’t wish third-parties to feast their eyes upon. One of the great things about this app is the use of intelligent user-interface design to make the whole experience a fun and pleasurable one. Photographs represent memories taken throughout our lives and should be afforded the luxury of being managed through a beautifully designed interface, which PicStory provides with its clean lines and elegant visuals.

Although the app contains a number of additional features such as setting up themes, social sharing and album backup capabilities, it is perhaps the slideshow feature that really steals the show. The app contains a number of different image and transition effects that can be applied to the photographs as well as being able to insert a music track directly from the iPad’s music library, effectively turning the iPad into a beautiful, personalized Retina photo frame. PicStory is compatible with all generations of iPad, requires iOS 4.2 or above and is available from the App Store for $4.99. 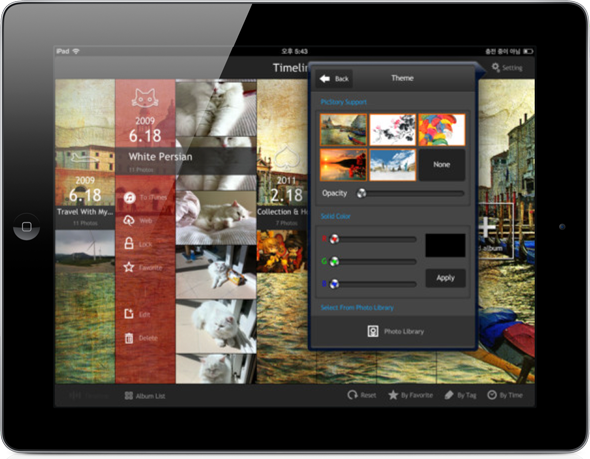