Philips launched the Hue smart bulbs that could be wirelessly controlled using your iOS device. Taking things further, the electronics giant has released an updated Philips Hue companion app, which comes with its very own Notification Center widget for iOS 8 / 8.1.

Philips Hue are no ordinary bulbs, in fact, as the name suggests, users can change the color – or more appropriately hue levels – of the bulb(s), or even schedule the lighting of their choice. All of this, however, requires the user to tackle an app and set it up for desired results. 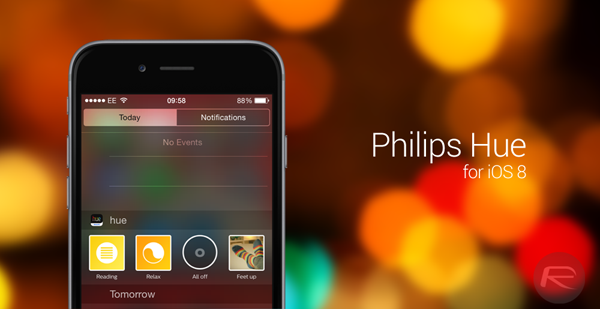 A concept of a widget for the app was earlier revealed by the Philips Hue Dev team a few months back in preparation of the then-unreleased iOS 8, and now finally, the team has announced via Twitter that widget support is available.

If you have the Philips Hue app installed on your iOS 8 / 8.1 device, then by now you should see an update available in the App Store, and will bring in not just widget support, but improvements for iPhone 6 / 6 Plus, and a fix for geofencing issues that users might have been facing.

Users can add the widget to the Notification Center via the Edit button, and configure the different scenes / moods to be available for quick toggles. Basically, the widget acts as a presets holder for various lighting settings. This way users can quickly override any existing setting, without having to go through the app to get the desired result.

The complete changelog of the new Philips Hue app for iOS is as follows:

– Widget has arrived. Add it in your notification center via the “edit” button, and configure it for your favorite scenes in our app.
– Improved support for iPhone 6 and iPhone 6 plus devices
– Fixed issue with geofencing
– Improved overall stability 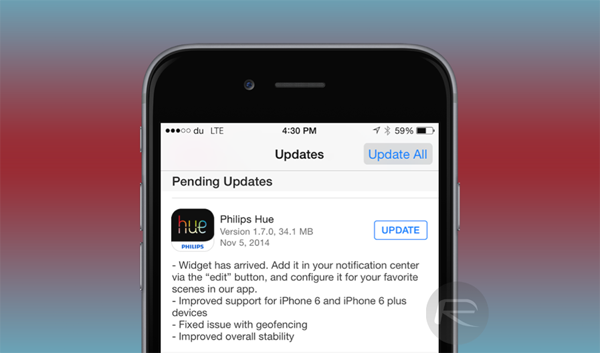 The list of changes might look small, but if you’re a Philips Hue owner, then there’s no reason to not update right away.

You can grab the app from link which we’ve embedded below, and as ever, the piece of software is absolutely free to download.

(Download: Philips Hue for iOS on the App Store)