For years now, many have been attempting to figure out new ways of bringing 3D displays to mobile devices, although none of them has reached mass market. While a widely marketable solution is likely still ways away, the Palm Top Theater is an affordable way for 3D content to be played on the iPhone.

The new device, which was first shown off way back in 2010, is now available for sale in Japan, US, UK and Europe. The device’s main component is a half-silvered mirror that is placed at a 45-degree angle on top of the device’s screen, creating an optical illusion that looks very similar to genuine 3D. The mirror is easily attachable to the device and works straight out of the box. 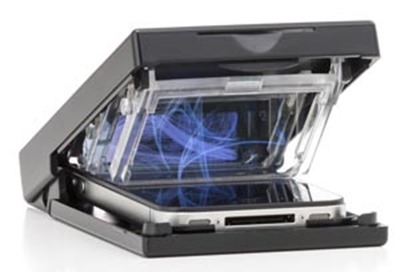 Palm Top Theater will not turn all of the 2D content on your device into 3D content: instead, it only works with content specifically designed for the accessory. While not much third-party content is available at the present moment, there is some sample video that looks fairly good, including nature sceneries and footage from well-known arcade games, giving everyone a good idea of the device’s future potential. To make it easier for users and content makers alike, the Palm Top Theater ships with a companion app, available from the iOS App Store, that works as a directory for all 3D compatible 3D content: roughly 20 MB in size for short animations, and prices range for free to €1.79 (roughly $2.33).

While this device is unlikely to make a huge consumer impact, sticking to the shelves of geeks and animation enthusiasts, it will for sure reignite the debate on how to bring 3D technology to small devices. This implementation has the advantage of being fairly affordable and easy to build, everyday consumers might not take it on in its current form, mostly given the need to detach the device in order to use it for any everyday function other than 3D video.