OnLive may have started out life as an online gaming company but it’s taken a step towards being a full-on business offering of late with the release of OnLive Desktop for the iPad. Now the firm is seeking to monetize its latest business-focused venture by offering a pay-for subscription service which will offer new features to those willing to pay up.

Back when OnLive first became a reality, it was aimed at making gaming a possibility on just about any device with an internet connection. The idea was both simple and ingenious – take a set of high-powered servers and a wicked-fast network connection and stream the video to the third part, in this case us gamers. The video is displayed in OnLive’s app or via its set-top box and keystrokes or gamepad interactions are sent the other way. It was a brilliant way of bringing games to low-powered machines and those not able to splash the cash on a traditional games console. 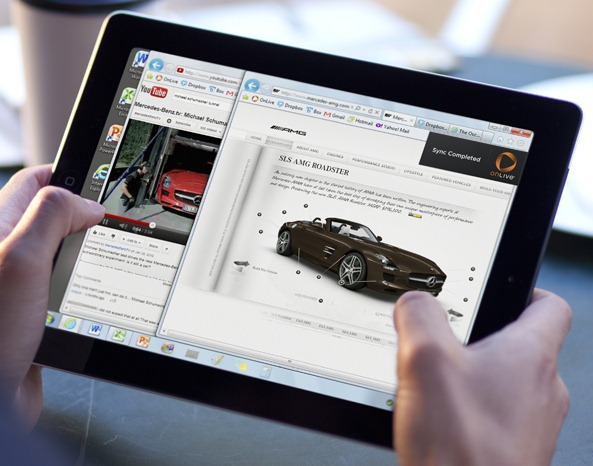 Turns out the whole idea of making apps work on devices they shouldn’t actually extends well to the business, too. OnLive Desktop gave iPad users a way to access a Windows machine with Microsoft Office installed, along with 2GB of storage for files. Now OnLive Desktop Plus goes one step further by adding internet access to the mix via Internet Explorer 9.

So, what we have here is an iPad app that connects to a Windows PC, which then connects to the internet via Internet Explorer. We’re fairly sure this isn’t what Steve Jobs had in mind when he put foot to stage to announce the iPad, but few can argue against its usefulness if you really do need to use such things and don’t want to use a Windows 8 tablet when they become available.

The Plus subscription will set people back $5 a month, which gets you that IE9 access over a gigabit internet connection as well as priority access to the service. Those with free accounts are granted access based on current demand.

Those wondering – and we know you are – whether this means you can sorta-kinda run Flash on an iPad are in luck, because yes, you can. It’s obviously not quite the same as a native implementation, but it’s better than nothing.

We’ll reserve judgment until we’ve been able to try it out ourselves.

Do let us know what you think if you beat us to it!