With Wikipedia having extraordinarily blacked-out today in protest against the SOPA and PIPA anti-piracy bills, social sites have temporarily become hubs for surfers to vent their frustrations – particularly those reliant on the world’s largest online encyclopedia in order to complete college/school assignments.

After a long wait, the Android Market is now home to an official Wikipedia app, which is free as you’d expect, and boasts a host of essential features. One can save an article for offline reading at a later date, search for articles nearby, share articles with friends using Android’s in-built "Share" function, and effortlessly read any given article in a different language. Additionally, searches can be carried out in full-screen, giving maximum visual real-estate in the quest to track down that key article.

The SOPA and PIPA coverage has literally taken over all news and communication outlets today, with many fearing Web censorship as a foregone conclusion. Then again, with sponsors of the bill dropping out like flies amid the protests, it does seem as though there’s a good chance the no-shows from the likes of Wikipedia, Boing Boing and thousands of others will carry a great deal of weight moving forward. 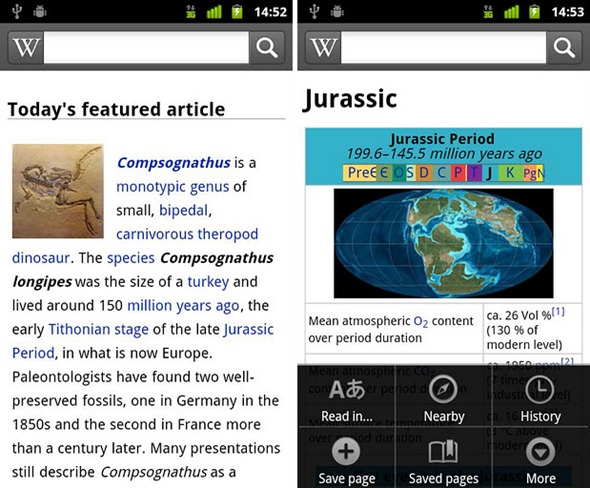 As a commentator of most things tech-orientated, it’s refreshing to see members of the Web uniting with such a stick it to The Man attitude. It’s a rare occurrence, with many users often taking things for granted, but the implications of this bill being passed will affect every surfer across the globe. For example, as Joshua Hill (better known as Chronic Dev frontman p0sixninja) points out, the distribution of jailbreak software would become illegal activity under the Stop Online Piracy Act. Of course, the likes of greenp0ison and Redsn0w could theoretically be shared, but developers would be placing themselves in incriminating positions – leaving us smartphone enthusiasts literally stuck with stock.

To conclude this sermon, the Wikipedia app is an essential tool for those with a hunger for knowledge, and early adopters of the Android version have been quick to offer mostly five-star ratings for the brand-new app. Today’s blackout hasn’t affected those on mobile devices – at least not those sifting through Wiki articles – so as you’d probably expect, this app works a treat at time of writing.

Download it, give it a while, and let us know if you too would give it the full five stars via the usual mediums below.