Apple and Samsung may be currently locked in a rather ugly trial centered around various alleged patent and design infringements, but that doesn’t mean the owners of either company’s products needs to needlessly suffer. Samsung’s Galaxy Tab 10.1 is one of the products that finds itself right in the middle of the ongoing dispute between the two technology giants, but even in the midst of all the legal wrangling, it still manages to find itself receiving a nice new software update which brings new and improved Android features.

If you are the proud – or even possibly ashamed – owner of a Galaxy Tab 10.1 then you might find yourself receiving an imminent notification advising that Android 4.0 Ice Cream Sandwich is available for immediate download. We understand that this software update is only currently rolling out to United Kingdom based Galaxy owners, and at present, we aren’t entirely sure if users in other territories can expect to see similar updates in the near future. As part of the firmware update, the device will prompt the user to download and install a 237MB file to enable all of that Ice Cream Sandwich goodness. 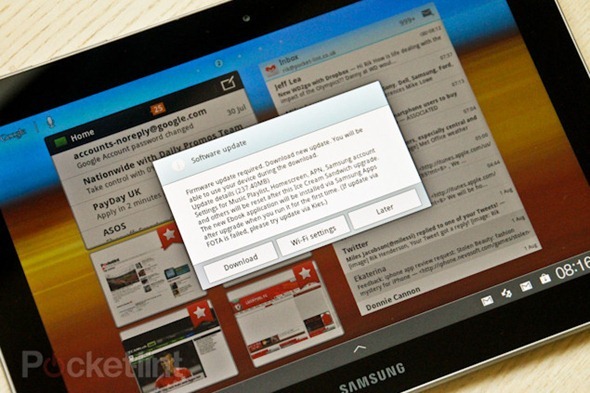 Any notification of the availability of a new Android version is always good news for device owners, especially when you consider the insane fragmentation with Google’s mobile operating system. But it is also an update that might be classified as bitter-sweet for some users given the fact that devices like the Nexus 7 have access to the new and highly praised Jelly Bean version of the software. An update is great, but an update to what is already an out of date operating system is not so great in our opinion.

It isn’t just the 10.1 that is receiving the Ice Cream Sandwich love. Owners of Samsung’s 7.0, 7.7 and 8.9 tablets are also expected to be receiving the update notifications, allowing the firmware files to be download and updated over the air on the device itself, or alternatively through the use of the Samsung Kies software. One piece of good news about the update is that it is actually the latest version of ICS, Android 4.0.4, that is being pushed out to the Galaxy Tab lineup and will hopefully bring enough new features and improvements to keep users happy.

With all eyes currently focusing on Samsung and Apple for perhaps the wrong reasons, it’s nice to see some of those Galaxy Tab loving customers getting an update that will attempt to bring some additional battery life and improved processing speed, as well as giving them access to the new interface that lives within Ice Cream Sandwich. If you haven’t received the update on your UK device yet, worry not as the update process is gradual.